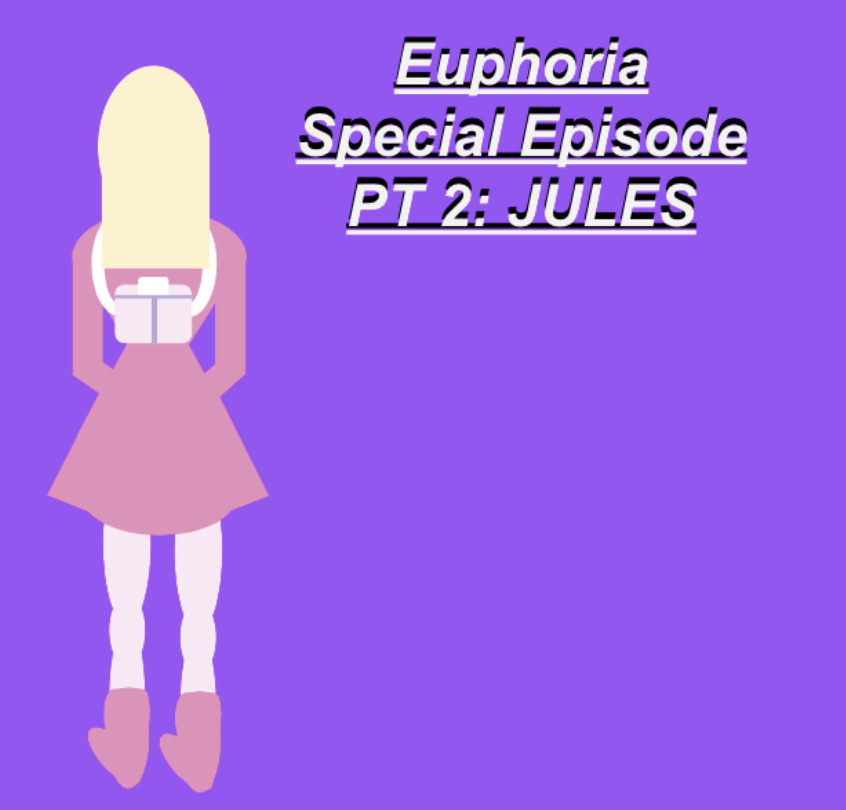 “Euphoria’s” second special episode, featuring the character Jules Vaughn, was released on HBO max on Friday, Jan. 22. The episode, the second installment of what is referred to as the show’s season “zero,” offers a thought-provoking plot line, with thoughtful and believable characters. Taking place during a therapy session, the episode highlights Jules’ complex emotions and her past.

In season one, Jules, played by actress Hunter Schafer, is portrayed as a fun, free-spirited and independent girl. The first season provides some details about Jules backstory and the struggles she has faced as a trangender teenager. However, much of the focus is on her relationship with the character Rue.

This 48-minute special episode went into great depth. It opens with Jules sitting on a couch having a realistic and interesting discussion with her therapist. A large portion of the episode takes place in this setting, along with some flashback clips and an ending scene that took place outside of the session.

The episode excels at sharing a very unique perspective coming from a young transgender woman. This is a perspective many of us cannot relate to or lack knowledge of, especially due to a lack of representation in media. During the discussion, Jules is prompted by her therapist to share her feelings in regards to her identity and her relationship to femininity. She expresses how she feels that she has spent her whole life shaping her body and personality into what she believes men find desirable.

“I feel like I’ve framed my entire womanhood around men,” Jules said to her therapist at one point. This conversation was valuable because it brought attention to some experiences in relation to womanhood that can be varied or heightened for transgender women compared to cisgendered women. This is a conversation we don’t often hear, especially in mainstream television shows like “Euphoria.”

The writers additionally do an excellent job of making Jules into a believable and relatable character. Throughout the therapy session, there were times when Jules was incapable of talking about difficult topics, as most people would be. Jules has thought patterns and moments where she spirals that make her more believable and relatable to audience members. Schafer’s acting was also impressive and aided in bringing Jules’ character to life.

While her identity is one theme discussed, Jules’ struggle when it comes to her relationship with Rue is also emphasized. After battling drug addiction, Rue became dependent on her relationship with Jules for support and stability. This left Jules feeling like she had to walk on eggshells around Rue and feeling responsible for her sobriety. She feels immense amounts of guilt when not complying with Rue’s wishes and fears that Rue will relapse or overdose if she’s not there for her.

The plotline succeeds at presenting an interesting perspective from someone who has an addict in their life. Rather than showing the ways addiction impacts a person directly, as seen in the first season, this episode demonstrates the emotional toll it takes on Jules to have someone she is close to be an addict. I admire the writers for bringing attention to this less discussed side of addiction.

One reason season one of “Euphoria” was so popular is the unique and engaging filming techniques that were used. This new episode renders an engaging visual experience and is aesthetically pleasing, which furthermore adds to the emotional reactions experienced by audience members. The episode opens with an interesting technique that draws you in from the start. Jules’ past memories are reflected over her eye in order to make it appear like she’s watching a movie of her own life. There is also a beautiful scene filmed in the ocean in the middle of the episode. This episode’s production and design does not disappoint.

This episode was consistently engaging and brought attention to several valuable discussions and topics. The writers and producers portray meaningful themes in an appropriate and graceful way, all while furthering the plot in preparation for season two. I give “Euphoria Special Episode Part 2: Jules” 5/5 stars.