‘Wonder Woman: 1984’ fails in face of expectations set by its predecessor 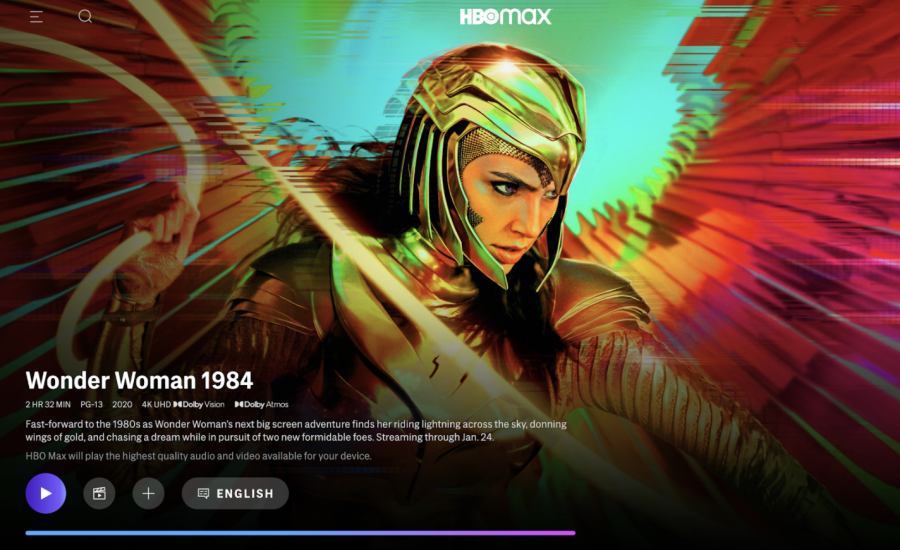 Wonder Woman 1984, released in theatres and HBO Max on Christmas day, fails to meet expectations set by the first film.

“Wonder Woman 1984” finally premiered in theatres and HBO Max on Christmas day, over three years after the first film in the franchise, “Wonder Woman” (2017), was released.  After 2020’s series of movie delays, including other blockbusters such as “Black Widow” and “No Time to Die,” I was practically chomping at the bit to watch this film. The excitement was even more heightened by my love of the first “Wonder Woman,” which I rewatched for a third time in preparation to see the sequel.

Given the all-star cast, success of the sequel, and dedicated fanbase, this movie seems predestined for success. This made it even more disappointing to realize that this sequel falls short in filling the shoes of the first “Wonder Woman” film.

“WW84” follows the life of Diana Prince in 1984, decades after the events of the first movie. Diana, far from the naive and culture-shocked hero of the first Wonder Woman film, has assimilated to modern life and has a day job as an antiquity researcher at the Smithsonian. She works alongside Barbara Minerva (Kristen Wiig), a geeky researcher who possesses an ancient magical artifact that struggling businessman Maxwell Lorde (Pedro Pascal) has his eyes on.

The first half of the movie had me fooled. The exploration of Diana’s new life through her relationship with Kristen Wiig’s character, Barbara, serves to highlight the far-from-naive attitude that Diana has taken on after her many years on earth. It seemed as if the movie might dive more into this contrast, further exploring the complexities of Diana’s past and its effect on her.

Once the action begins however, the movie quickly devolves. The number and length of fight scenes were excessive, and there was little plot to tie them together. In addition to this, the mechanics of the magical artifact, a device which drives most of the conflict, is ill-explained. The overall effect of this is that the movie seems ungrounded and is frustrating to watch.

The character complexities of Diana come into play when (spoilers) Steve (Chris Pine), her dead lover from the past movie, is reincarnated. The comedic sequences involving those two were perhaps the most enjoyable parts of the film, however they go by quickly, and are lost to the onslaught of action scenes.

Adding to the issue is that, of the abundance of action scenes, few of them approach the awesomeness of the first movie’s battles. The first “Wonder Woman” featured a cohesive, gritty grey-blue aesthetic punctuated by the warm gold and red of Diana’s costume. This added drama and depth to action scenes, in addition to emphasizing the character-defining warmth of Diana.

In stark contrast, “WW84” capitalizes on the flashy nature of the 80s, but with poor execution. The overwhelming amount of colors and effects does a disservice to the typical brooding style we’ve come to expect from DC movies.

This sequel continues to depart from DC norms in its shallow exploration of Diana’s character. In the first movie Diana was portrayed as relentlessly optimistic and naive, qualities which could manifest as strengths or weaknesses. “WW84,” despite its great potential, fails to commit itself to delving deeper into Daina’s character or her relationship with Steve. This results in the movie presenting as a fluffy, shallow rendition of the more complex characters that appear in the first film.

All in all, If you’re looking for a showy, simplistic, action filled movie, then this is for you. That said, the precedent set by the first “Wonder Woman” movie’s degrees of complexity in its cohesive aesthetic, worldbuilding and action left its sequel feeling empty and inexplicably lacking. I give this movie a 3/5.