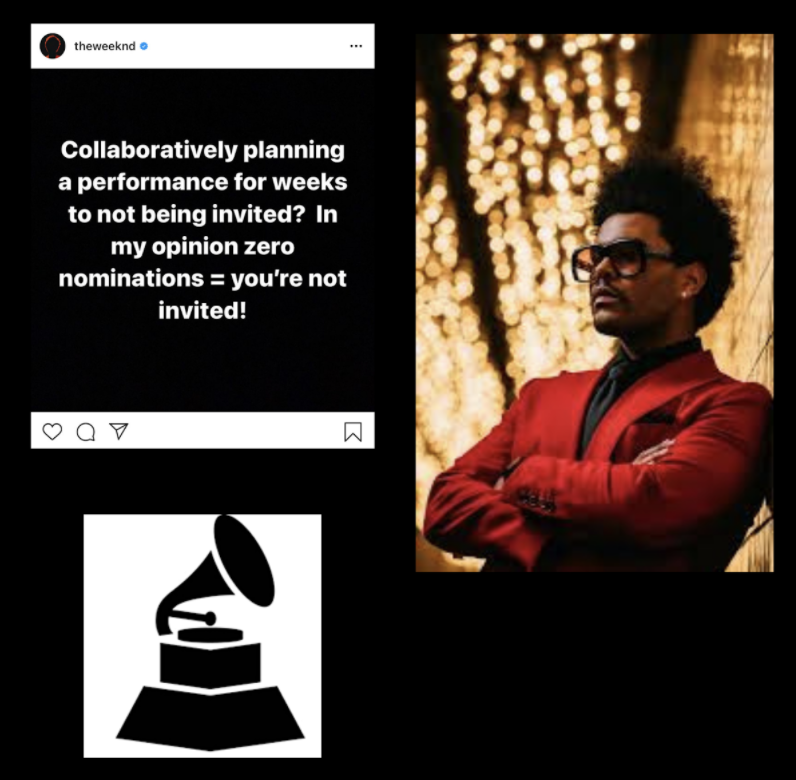 Musical artist The Weeknd was left frustrated by the Grammys after receiving zero nominations for the 2021 awards.

#Scammies2021 trended on Twitter after the nomination list for the 2021 Grammy Awards was released on Tuesday, Nov. 24.

Popular artist The Weeknd was one of the most vocal about the 2021 Grammy nominations after his chart-topping album “After Hours” wasn’t nominated for any awards. He took to social media to publish his thoughts on the award show, and many of his fans and fellow artists agreed.

“The Grammys remain corrupt,” The Weeknd said on Instagram. “You owe me, my fans, and the industry transparency.”

The Weekend’s lead song “Blinding Lights” stayed in the seventh position on Billboard’s Top 100 Song chart even a year after it first dropped, yet still received no nomination. His album was the biggest and most successful album to drop in 2020, topping charts all over the music industry.

Students at Staples High School were frustrated with the results of the 2021 Grammy nomination list after The Weeknd did not receive a nomination for “After Hours.”

“I was surprised that he wasn’t nominated because he won a lot of other awards at the VMAs and AMAs,” Sarah Thomas ’22 said. “I’m not sure how Grammy nominees are determined, but there had to have been some form of corruption because he deserved at least one Grammy nomination this year, and that should have been for album of the year.”

Fellow artists such as Drake commented on the Grammys and how the award show has been corrupt for years. It seems as though nubbing award-winning artists and albums isn’t a new issue.

“I saw Drake’s Instagram story and knew exactly what he meant,” Julliette Savarino ’22 said. “The Grammys have given out their awards to the wrong artists for years and the fact that The Weeknd didn’t even get nominated is crazy to me.”

Overall, the list of the 2021 nominees has created an outbreak of anger amongst fans of The Weeknd. There is a possibility The Weeknd might be nominated for the 2022 Grammys; however, that is unlikely due to the window of time artists have to release music to potentially be nominated.