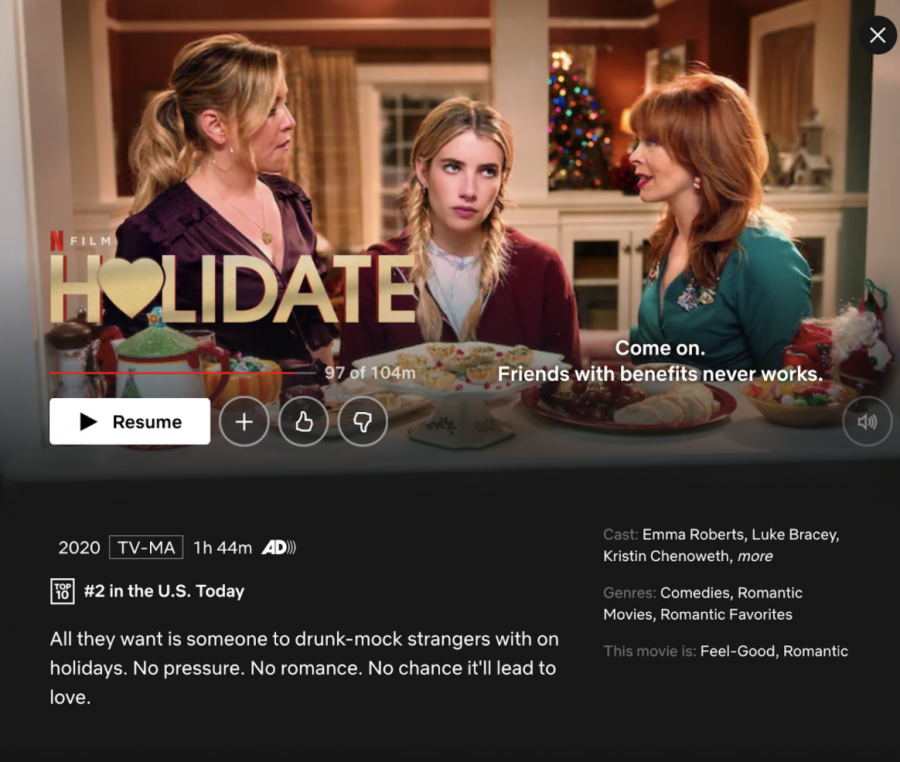 “Holidate,” a film about two strangers who are fed up with being single on the holidays, was released on Oct. 28.

During this movie, you follow Sloane, a “Hot-mess singleton” who is fed up with her family trying to set her up with a different guy every holiday. After meeting Jackson at a mall, they quickly connect and strike an unusual deal. The two of them make a pact to be each other’s holiday dates- “holidates”- for every holiday. The audience gets to watch this story unfold, as their seemingly meaningless deal turns into real feelings for one another.

The opening scene introduced Jackson and Sloane celebrating Christmas. Both characters seemed miserable, but there was little explanation to why they were so down on the holidays. Throughout the movie, director John Whitesell showed flashbacks from the past which clarified the emotions during the opening scene. Although the lack of clarity in the first scene caused confusion for the first part of the movie, Whitesell did later explain why these scenes were there: to show how Jackson and Sloane need each other.

The intriguing story line made it impossible to resist, and the film was funny while still including several emotional scenes, to keep you laughing and crying throughout. Throughout the movie you learn more about both Jackson and Sloane’s personal lives. The movie goes back in time to clarify why both characters would need a “Holiday.” Although mostly comical, Whitesell did a brilliant job adding emotional scenes that allowed us to connect with his characters. Whitesell shows us how a platonic relationship between two strangers can blossom into real feelings.

“Holidate” is definitely one of my favorite holiday movies, one that I would recommend to anyone who loves romantic comedies or the holiday season. I rate “Holidate” an 8/10.