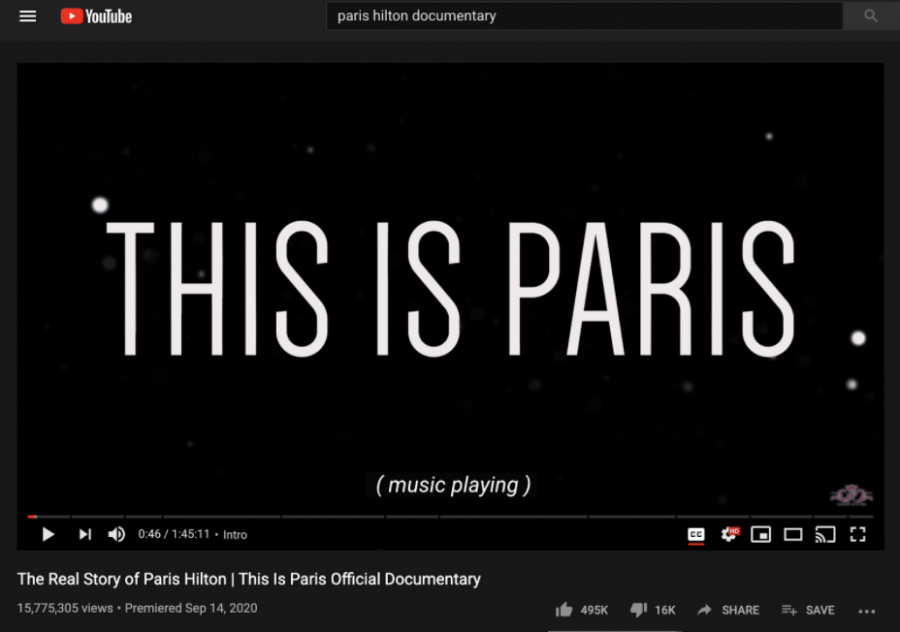 “This is Paris” provides insight to the tragedies of social media as well as the horrors of fame.

Some call her the queen of social media, while others call her the beginning of influencer culture. Either way, Paris Hilton is undeniably an American icon, but very few people have respect for her (and her 19 brands). After racking up almost 16 million views in under four weeks, my skepticism let its guard down and I finally gave into the “hype” of her new documentary, “This is Paris” (available on YouTube). After watching all 105 minutes of the movie, viewers will discover a newfound respect for the seemingly bratty blonde, just as I did.

Hilton admits that her persona is mostly a facade, and she is in fact an innovative person who has built a name for herself by creating a character. After watching the documentary, viewers will realize how Hilton assembled her own fame off of her grandparents’ successful hotel chain and re-established her relevance by releasing a documentary accessible to all.

While this is very much a contradiction, Hilton shows the horrors of “fame,” and the downfalls of always having cameras on you. Fame is usually romanticized by teenagers, but what outsiders don’t understand is that the struggles of the celebrity often go unnoticed. For example, the Hilton family always feigned perfection and, as a result, Paris never addressed her feelings and opened up the discussion about her haunting trauma.

Although she claims to have invented social media mentality, the documentary proves that Hilton feels shame for endorsing such an industry. She even claims to feel badly for current teenagers who live on social media, constantly aware of society’s standards and attributes this way of life to herself.

However, Hilton goes on to portray that social media does not depict the true essence of one’s life – it is only a glamorized version of the truth. Because of this, no one knows what is truly going on behind closed doors. Throughout the documentary, Hilton goes on to reveal a traumatic experience that she was reluctant to share with any family members, let alone viewers.

This part of the documentary showed that pretending to be someone you’re not can actually harm you in unimaginable ways. Because Hilton pretended to be the stereotypical “dumb blonde,” she never received adequate treatment for her post-traumatic stress. This is an important messages for teenagers because it shows that you don’t need to “play stupid” or pretend to be someone you’re not in order to be well-liked.

Nonetheless, as a result of the insider scoop viewers received, I was skeptical as to whether or not some of the clips shown were staged or real. It seemed almost fake that videographers were able to capture such intimate moments. Despite this cynicism, said clips added more viewing pleasure.

I enjoyed every minute of this documentary. Even though it seems like an insignificant topic to those who have yet to watch, “This is Paris” helped me understand the roots of social media and the perturbation of fame. So, let’s cut to the chase. Is this documentary worth your time? Absolutely. Will you enjoy it? Most likely. Will you want to become a multi-million dollar influencer? Probably not. I’d rate this movie a solid 9.5/10.