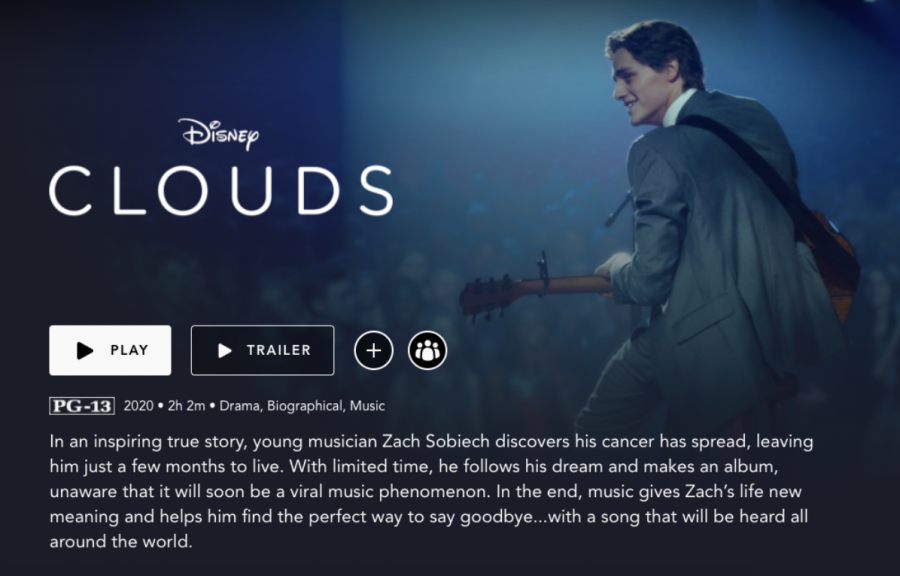 Disney’s original movie ‘Clouds,’ based on a true story, leaves viewers in tears while singing along to the single written by cancer patient Zach Sobiech.

“Clouds,” a new Disney original movie, was released on Oct. 16. The brilliant and engaging plot led to an emotional rollercoaster filled with both tears and laughter.

The film is based on the true story of the life of Zach Sobiech. He was diagnosed with Osteosarcoma, rare bone cancer at age fourteen in 2009. He was always a fan of writing music, so after learning he had cancer, he began songwriting with one song being “Clouds.” After Sobiechs’ death, the song hit No. 1 on iTunes charts and hit No. 1 again after the movie was released. Sobiech’s mother also wrote a memoir, “Fly a Little Higher: How God Answered a Mom’s Small Prayer in a Big Way.” Between the memoir and the song, it inspired Director Justin Baldoni to produce a movie.

Similarly to the plot of “Clouds,” Baldoni also produced and directed the film ‘Five Feet Apart’ which is about a couple with cystic fibrosis. Baldoni’s similar directing style can be seen in the tear-jerking “Clouds.” Baldoni uses the feeling of love to his advantage, using it to better connect characters and to allow the audience to get to know the characters.

Throughout the movie, the audience is able to learn about the main character, Zach Sobiech, and how his friends and family deal with his cancer. Sobiech is not ashamed of his cancer; rather, he absorbs it and attempts to use humor as a coping mechanism. For instance, when Zach’s best friend, Sammy, is too nervous to sing, Zach instantly swoops in, grabbing his guitar, and begins singing “I’m Sexy and I Know It.”

But Zach also struggles with the insecurities known to many teens. He knows if he continues chemotherapy he could get a few extra months of life, but he still questions if he can quit chemo so he doesn’t have to be the “bald cancer kid.”

Ultimately, though, Zach wanted to do good for others and leave a legacy so that no one else ever had to feel like “the cancer kid.” So he created a fund in order to find a cure that continues to this day, and has presently raised $2 million dollars.

The cast also includes Fin Argus (who plays Zach), Sabrina Carpenter (who plays Sammy Brown, Zach’s best friend), Madison Iseman (who plays Amy Adamle, Zach’s girlfriend) and a few others including Neve Campbell and Tom Everett Scott. The incredible chemistry of the actors and actresses add to the film overall and make it feel realistic.

“Clouds” is definitely one of my new favorite movies that easily receives a 10/10. I would recommend it to anybody who loves the romance genre but are okay with shedding some tears.