“The Boys in the Band” adaptation delivers mixed performances 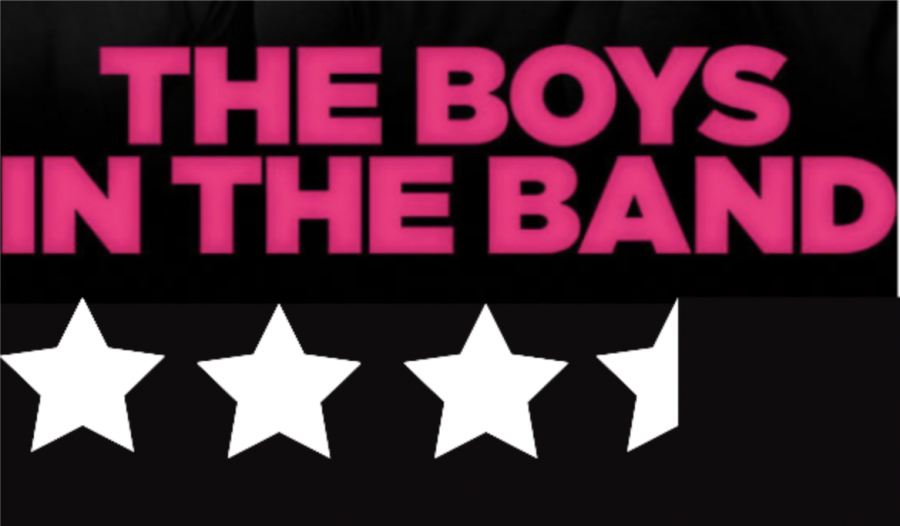 “The Boys in the Band” received an 81% overall rating on RottenTomatoes.com, with generally favorable reviews from critics and the public alike.

“The Boys in the Band” is a hugely varied movie. It pinballs between peaks of raucous joy and caverns of insufferable tragedy, and performances both marvelously rich and surprisingly flat. These shifts in tone and quality occur as rapidly as the characters deliver snarky quips, making an interesting, if inconsistent, watch.

The recent Netflix adaptation revolves around seven gay men who gather in a Greenwich Village apartment for a birthday party. A number of volatile threads connect the characters—old flames, petty rivalries, unspoken feelings—but the celebration begins in high spirits. All goes well until the host’s straight college roommate arrives unannounced, throwing the group into a state of simmering tension and occasionally explosive turmoil.

First presented as an off-Broadway play in 1968, followed by a successful (if controversial) film adaptation in 1970, “The Boys in the Band” was very much a sign of the times. With hyper specific pop-culture references prattled off at an auctioneers pace and references to gay culture pre-Stonewall and pre-AIDS, the original play and film were firmly rooted in their time. An acclaimed Broadway revival of the play debuted half a century later in 2018, framing the story as a period piece, providing a window into a time both dated and poignantly relevant today.

The most recent film adaptation features an identical cast to the 2018 production, a star studded group comprised of nine openly gay actors. Michael, the neurotic, recently (and briefly) sober host of the party, is played by a middling Jim Parsons. Zachary Quinto’s electric performance as birthday boy Harold stands out, as does Robin de Jesús’ rollicking and heartbreaking performance as flamboyant Emory. Fan-favorite Andrew Rannells appears as well, playing alongside his real-life partner Tuc Watkins.

These moments of levity and excitement, of course, all come crashing down in the second act. What started as “The Birdcage” soon starts to look more like “Twelve Angry Men” as Michael’s straight college friend Alan, played by an appropriately dopey and perplexed Brian Hutchinson, intrudes on the event. A number of forces are at play here. Alan’s discomfort with the cast’s homosexuality noticeably affects self-conscious Michael, who attempts to get his partygoers to ‘play straight’ for the night. This backfires, leading to violent confrontations, searing arguments and a general air of chaos for the rest of the film.

The catalyst for this chaos comes around two-thirds in, when Michael proposes they play a game in which each man must call the person in the world he loves the most. The biggest hits and the biggest misses occur in this sequence, as the actors are pushed to their dramatic limits. On the superb end of the spectrum, Michael Benjamin Washington as Bernard delivers a truly heartbreaking performance as he unsuccessfully calls up a lost love. Bernard, being a black gay man in the late 1960s, is one of the most interesting characters in the film. Subject to discrimination both in the outside world and within his group of predominately white friends, Washington performs with a controlled grace that I would have liked to see more of.

On the less than ideal end of the spectrum, Parsons’ Michael is, sorry to say it, completely insufferable for the second half of the film. As the movie draws to a close, he rapidly devolves into a button-pushing, racist, dare-I-say evil character. Though there is a clear explanation for why he acts this way (self-hatred, relapsing alcoholism, etc.), Parsons’ performance lacked the nuance necessary to make his character worth watching. As I watched Parsons deliver what had been touted as the most iconic line of the source material (“If we could just learn not to hate ourselves quite so very much,” through tears), I found myself thinking “That’s it?”. What had the potential to be a truly breathtaking, impactful performance was fumbled by Parsons’ one-note delivery.

Ultimately, “The Boys in the Band” is a worthwhile watch for those interested in a skewering dramedy with a well-dressed set and a star-studded cast, but certainly isn’t without its faults. Its shortcomings are luckily minimized by the wonderfully strong ensemble and still-relevant source material, but it’s certainly not an easy watch for a relaxing night in. 3.5/5.