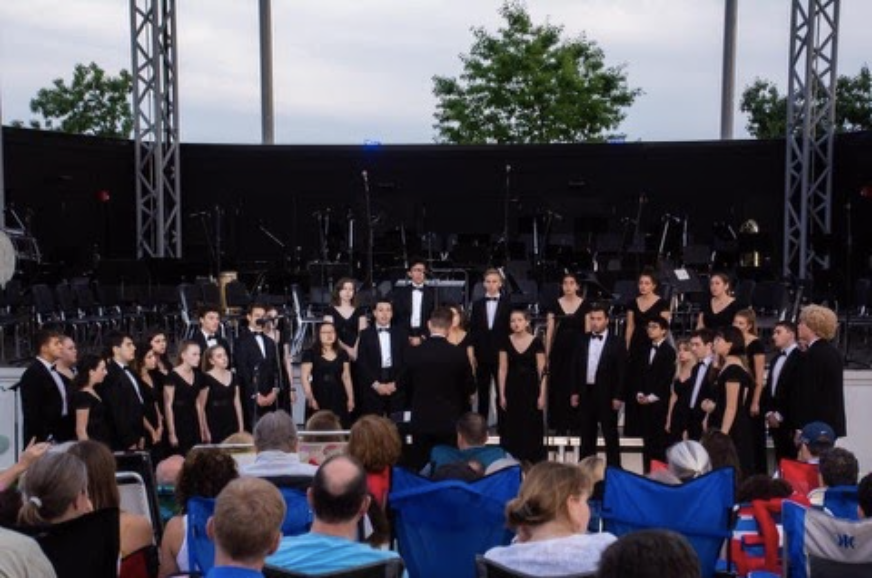 Orphenians concerts cannot occur as they have in previous years such as in this performance at the Levitt Pavilion last year. Orphenians will miss performing to a live audience, which is a favorite part of the choir for many.

As the curtains closed hastily on last years’ theater and choral programs due to the shut down of schools, Staples’ musicians wondered optimistically what the 2020-2021 school year would entail for the Orphenians. While the debate about sports seasons rages on, the music program is also facing drawbacks over how their rehearsals and performances will occur.

“Because of the CSDE guidelines , we can only sing for 30 minutes of straight singing and then we have to change spaces. We will move between the rehearsal rooms and the auditorium,” Luke Rosenberg, the Orphenians conductor, said.

Thirty-nine people have been selected to be in the group this year, separated into two cohorts primarily by last name and adjusted as necessary to form balanced choirs. One of the chambers will rehearse and perform with 19 people and the other will do so with the other 20. Rehearsals occur weekly on Tuesdays, with one cohort practicing from 3 to 4 p.m. and the other from 4 to 5 p.m.. Paired with the inconvenience of timing restrictions and location change mandates, the physical spacing in the room is another drawback that will further challenge singers.

“We’re not used to singing that far apart and it’s hard because you can’t really hear the people around you.” Rosenberg said. “With masks on, it’s a whole new level of difficulty.”

While Rosenberg is upset that he cannot rehearse with his whole group, he also acknowledges some benefits with the smaller, chamber-sized choirs.

“It’s good to be able to rehearse in smaller groups sometimes,” Rosenberg said. “It’s not my preference, but it is good to do it occasionally.”

Students are disappointed that some of their favorite parts of the program will be restricted this year, including caroling, travelling and their busy concerts.

“Since I’m a senior, it kind of sucks,” Sophie Rossman ’21 said. “I’m not going to get to see all of the people I’ve been rehearsing with since a freshman, and we don’t get to sing and perform all together for our last year.”

Candlelight, Orphenians’ most attended and renowned performance, evidently cannot occur this year like it usually does with a sold out auditorium and hundreds of musicians performing without restriction. The Candlelight concert will instead be filmed, edited and debuted when the Candlelight concert would have otherwise taken place this year. While it is difficult for musicians to say goodbye to this live performance that they enjoy so much, there are also some positive aspects to the new format.

Because of the limited time the choir can spend singing, more emphasis is being placed on music theory, which strengthens the musicians’ ability to comprehend and process music.

“We’re learning a lot more,” Sydney Gusick ’22, member of Orphenians, said. “Previously, we had to already know how to sound the way he wanted you to. Learning about music theory and how things actually work is strengthening our brains.”

While the Orphenians certainly have a unique year ahead of them, the cooperation of students and teachers has made the transition more manageable.

“I’m most disappointed about the fact that I can’t have them all here together. That’s the hardest part for me,” Rosenberg said. “There’s lots of little challenges to make it work, but we’re working our way around it.”