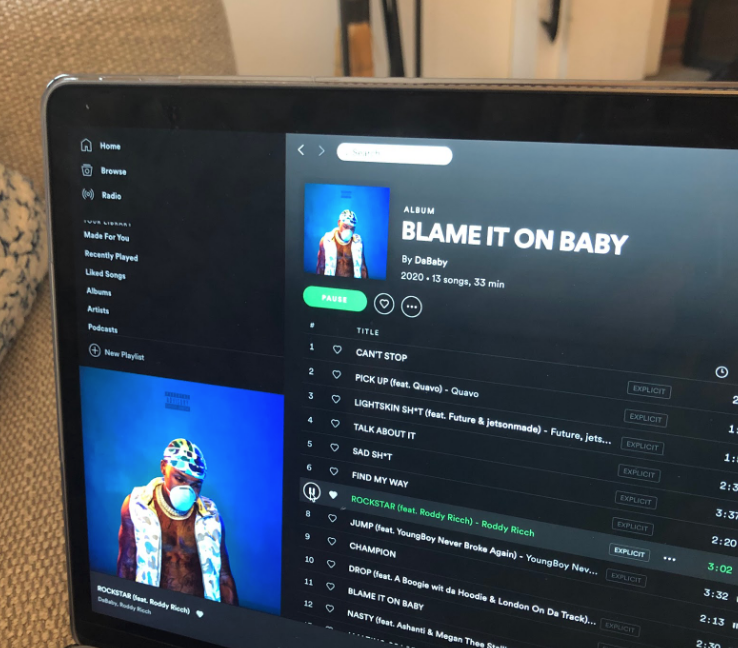 Last Thursday, BLAME IT ON BABY appeared on spotify, apple music, and other music websites.

“Every single person in my life tell me I’m their hero,” DaBaby sings, which certainly applies at the time due to the global pandemic. Some might say this new album is saving them. Last Friday, “BLAME IT ON BABY” appeared on Spotify and Apple Music, exciting DaBaby’s many supporters all over the country and making a mark in the rap industry. Born Jonathan Kirk, DaBaby has just recently taken over the music industry with his unique fast rap styled music. Following his last two successful albums, “BABY ON BABY” and “KIRK,” he has now released a new set of songs that feature several other popular young artists.
His debut studio album “BABY ON BABY” peaked at number seven on the Billboard 200, while his second studio album, “KIRK,” debuted at number one. In “KIRK,” popular singles such as “BOP” and “VIBEZ” caught listeners’ attention, and this positioned him to make an even stronger appearance over the next few months. In fact, several of his new tracks have already impacted the Billboard Hot 100.
DaBaby’s music style includes hip hop, trap and hardcore rap. He is known for singing with an airy, yet strong and confident voice, usually with a subtle bounce and solid beat. “BLAME IT ON BABY” follows this pattern with the exception of a few off kilter songs. Personally, I prefer this album, as it features this side of him more than others.
He begins the album with “CAN’T STOP.” Right from the start, there is a bold and upbeat vibe. While he is the only one singing, this song is strong from start to end. Most of the album follows this trend with similar songs such as “JUMP” and “BLAME IT ON BABY.”
However, there were a few songs that had a much different vibe. “PICK UP” and “FIND MY WAY” are slower and less aggressive. While still displaying his grit, it sounds like he is taking his time. “PICK UP” features Quavo, who helps carry the song with his natural and energetic voice.
There are a few other artists who were featured on this album including Future, Megan Thee Stallion and Roddy Ricch.
My favorite song on the album is “ROCKSTAR” with Roddy Ricch. Ricch has also recently risen in popularity, and his quick and catchy voice fits perfectly in this song. He sounds at home when making an appearance towards the end of the song, and he balances DaBaby’s intense sound.
The album cover acknowledges the coronavirus, yet still manages to expose DaBabys personality. He is wearing a hospital mask and looking down in the photo, forever tying him to this moment in history. When the rap industry looks back on the release on this album, they will remember the control and energy that DaBaby wanted them to feel in his songs during a time of powerlessness. He has proved that nothing will stop him, especially not a global pandemic.