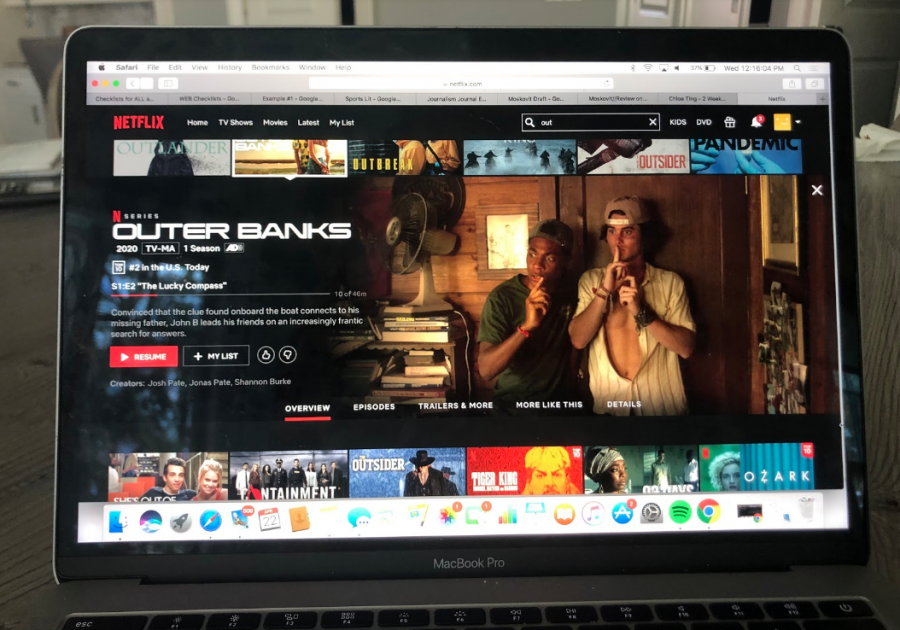 The new release show “Outer Banks” enhances a mysterious, adventurous teen drama show to allow viewers to binge watch during this time of being stuck inside.

Being stuck home during the COVID-19 pandemic, many are looking for something to do during quarantine. Some have taken up arts and craft, cooking or even working out. Teens are looking for shows to binge watch during this time of quarantine. Netflix just released the perfect 10 episode binge worthy series: “Outer Banks.”

With the recent release on April 15 on Netflix, the new teen drama is already in the top 10 of Netflix. The show follows with John B (Chase Stokes) getting his three best friends involved in a treasure hunt involving his dad’s disappearance. With each 50 minute episode, each one leaves you off on a cliffhanger, leading to a perfect binge show.

My favorite part of this Netflix original series is the adventure and suspense. A group of four best friends set out to go on a treasure hunt for $400 million in gold, and during this adventure, rules are broken. You will see the cast surf, boat, dive, ride stolen jets skis and run and paddleboard away from law enforcement. Each episode is one clue closer to finding John B’s dad, making you watch the next episode immediately.

Another aspect to why I fell in love with this show is the cast. Ultimately, the opening scene of the show introduces the characters and John B. asks why a cool rich girl, Kiara (Madison Bailey), would ever hang out with a bunch of lowly working class “Pogues” like John B. and his friends, Pope (Jonathan Daviss) and JJ (Rudy Pankow). The looks of these four people is another attraction to this show. John B.(Chase Stockes) has instantly become every teen girl’s new crush.

Each character has their own story which all relate to teens today. Topics like abuse, drugs and relationships are all brought into this show allowing it to be even more relatable. John B is wrestling with the absence of his parents, while Pope feels the pull of his growing pre-college obligations. JJ’s struggles with an abusive father and being the typical stoner start to bubble up in his friendships, and Kiara is more focused on the “Pogues” rather than the rich country club events.

The show follows with trying to find this treasure that John B’s dad had left behind before his disappearance. Relationships unfold with the rich girl Sarah Cameron (Madelyn Cline). Her relationship with the “Pogues” unfold even more secrets, and the truth is let out.

The final episode of this 10 episode series leaves viewers on a cliffhanger. There are many questions up in the air as to what is going to happen next. There has not been a season two filmed or announced yet due to COVID-19, but myself and viewers hope there will be to see their favorite characters again.

Overall, I have become obsessed with the show and the cast, and I am counting down the days till season two is released.