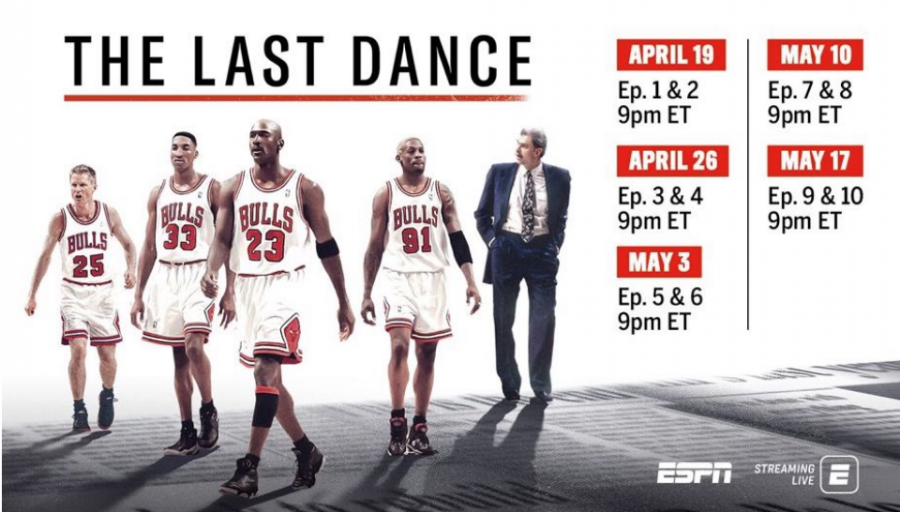 With two episodes each Sunday for the next five weeks, sports fans have something to look forward to in the short-term.

On the day LeBron James and the Cavaliers celebrated the first championship in Cleveland in over 50 years, Michael Jordan finally agreed to make a documentary using footage very little people had seen. After winning five championships in seven years, the 1997-1998 Chicago Bulls allowed a film crew to have unprecedented access for the entire season. Adam Silver, then the head of NBA Entertainment and now the Commissioner of the NBA, was able to capture footage unlike anything fans had ever seen.
The ten-part documentary series was originally slated to start after the NBA Finals in June, but due to the utter craziness we as a society are enduring at this moment, ESPN executives decided to move the start of the documentary up to April and into May to satisfy sports fans wishes. To be honest, it felt normal sitting down to watch something on ESPN for two hours. The entire sports world was tuned in to watch the career arc of the greatest basketball player of all time, and everyone who was there with him along the way.
This is just what sports fans needed. For many Staples athletes, their winter and spring season were either cut short and most likely will be canceled. While no one is going to be Michael Jordan, having the opportunity to witness something no high schooler was alive for is special. No one under the age of 22 saw Michael Jordan play for the Bulls. So, basically anyone who is in college and younger is likely just witnessing Jordan for the first time. It is an opportunity to appreciate the past and learn about the history of the game, and how sports have evolved over the last twenty years.
Michael Jordan was one of the most famous men on the planet, and that was evident during the documentary, as the Bulls traveled from city to city with fans mobbing him at any chance. One particular moment that stood out was when the Bulls were in Paris during the preseason for a few games against professional French teams. As they entered the arena, the security worker checking the players asked Jordan for his autograph. Even people who were supposed to be working could not pass up the opportunity to have a chance to get something out of Jordan, and he did not disappoint in those games in Paris for thousands of fans who had never seen him play before.
The documentary does a phenomenal job of going back and forth between “The Last Dance,” the 1997-98 season as coined by coach Phil Jackson, and the early years of Jordan’s life and career. From hitting the national championship-winning shot for North Carolina in 1982 to scoring a playoff record 63 points (which still stands today) on the eventual champion Boston Celtics in the Boston Garden, Jordan has had an astronomical effect on the game of basketball. Side note: those 63 points caused Celtics great Larry Bird to say, “That was God disguised as Michael Jordan,” in one of the most famous postgame interviews of all time. Director Jason Hehir’s job of telling the story of Jordan and tying in shorter moments about teammates, Scottie Pippen in episode two, with episodes to come about Dennis Rodman and other teammates. The only comparison that comes to mind regarding the back and forth aspect of the documentary is the work of Francis Ford Coppola and “The Godfather Part 2,” between the life of Michael Corleone (Al Pacino) in the present day, and his father Don Corleone (Robert De Niro) and his journey from Italy to New York. Both filmmakers do a remarkable job blending each scene together while telling multiple stories at the same time.
The sports world was mesmerized for two hours on Sunday night, with constant posts by media members on Twitter, and sports fans posting on Instagram around the country. “The Last Dance” is reminding the sports world how great Michael Jordan was and with candid storytelling and abstract details, episodes one and two “The Last Dance” did not disappoint and was everything sports fans hoped for and more.