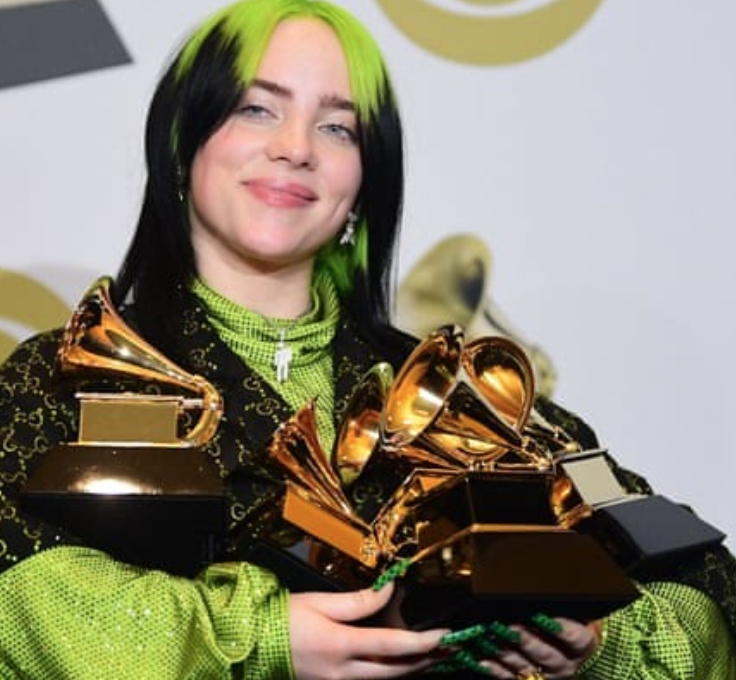 Photo courtesy of The Atlantic

Two years ago, 16-year-old Billie Eilish was just starting out her music career.  She and her brother, Finneas, grew a solid platform of 257,000 Instagram followers and played small shows for 50 people. Now, the breakout stars are selling out stadiums on a world tour, playing for 30,000 die-hard fans and headlining festivals for 100,000. Billie’s 50.7 million fan-base showed their support by making “When We All Fall Asleep, Where Do We Go?” the highest selling album of the 2019 year.

The 18-year-old pop singer swept the 2020 Grammy award show, winning five of her six nominations and making history by being the second artist and first woman to ever take home all four major categories in the same year.

Eilish won album of the year for her March 2019 debut album “When We All Fall Asleep, Where Do We Go?” The 12-song album, all of which made it onto the Billboard Top 100, was completely written and produced by Eilish and her 22-year-old brother in his bedroom at their childhood home in Los Angeles. She is the youngest solo performer to ever win album of the year; the title previously held by Taylor Swift, who won the award for “Fearless” at 20 years old.

Eilish won record of the year and song of the year for her single “Bad Guy,” which dethroned “Old Town Road” on the  Billboard Hot 100 chart and hit number one in November of 2019.

“Even though Billie’s fan base is majority teenagers, her music spans across all genres and makes it easier for anyone to enjoy,” Benji Clachko ’21 said.

Eilish also took home a Grammy for Best New Artist. Eilish recorded her first released song “Ocean Eyes” at 15 years old and gained tremendous recognition for her voice and lyrical style. In August of 2017, she released an EP “Don’t Smile at Me” and less than a year later collaborated with Khalid for a hit “Lovely,” launching her career into mainstream media and allowing her to release her first studio album less than a year later. Over the past year and a half, Eilish has gained a multi-million fanbase on social media for her music, fashion and performances.

Eilish’s wins in album, song, record and and artist made Grammy history. Before her,  Christopher Cross was the only artist to ever sweep all four categories in one year in 1981.

Earlier that evening, Eilish performed her single “When the Party’s Over” as her Grammy stage musical debut with her brother.

She additionally won a Grammy for Best Pop Vocal Album and Finneas was awarded for Producer of the Year, Non-Classical and Best Engineered Album Non-Classical for his part in “When We All Fall Asleep, Where Do We Go?”

“She’s unconventional,” Maya-Markus Malone ’22 said. “She has a unique style, amazing voice and has relatable lyrics that go beyond surface-level songs.”