‘Last Christmas:’ A classic song but a flop of a movie 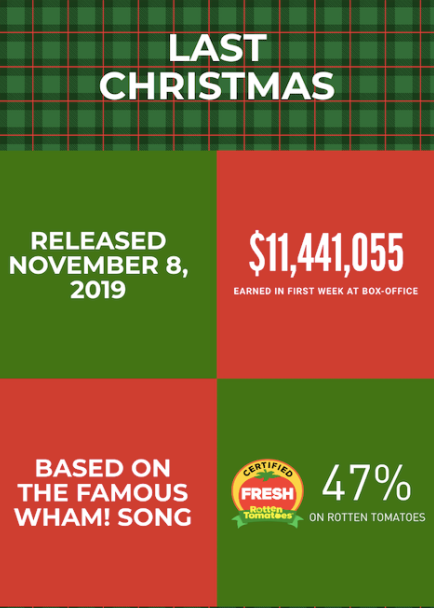 “Last Christmas”, the Christmas movie based on the famous Wham! song debuted in theaters Nov 8, 2019 as the holiday season starts to arrive.

As the temperatures start to drop and snow begins to fall, bright holiday lights illuminate streets and the song “All I Want for Christmas is You” seems to be playing everywhere you go. When the holiday season is in full force, my favorite thing to do is curl up in a warm blanket and watch Christmas movies. Paul Feig’s “Last Christmas” had the potential to be a holiday favorite many would watch for years to come, but it missed the mark.
Based on the classic Wham! song with the same name, “Last Christmas” follows Kate (Emilia Clarke), who works as an elf in a year-round Christmas shop. Throughout the film, she struggles to find her purpose in life. She later meets Tom (Henry Golding) who tries to help her find her way.
Despite the film being produced and written by Emma Thompson and starring incredibly talented actors like Clarke and Golding, this movie was extremely disappointing. I usually love guilty-pleasure rom-coms, but this one was unbearable from start to finish.
For starters, what seemed to be simple plot was never clearly addressed in the film. It kept coming up in the movie that Kate had been sick, but details were never explained, like what she was sick with or how it led her to this current point in the movie. The meaning behind Wham’s “Last Christmas” was also never made clear and I had no idea what the correlation was between the song and the movie until the last few minutes.
Because this film was written by Emma Thompson, a two-time Oscar winner, I would have expected “Last Christmas” to be more well written. The movie was filled with unlikeable characters and many side plots that were scattered throughout the film and not relevant. For example, there was a side plot involving racism in England that made no sense and didn’t fit in with the main plot.
There were also an abundance of comedy bits and jokes that fell flat. It seemed the movie tried to take inspiration from “The Office” with it’s awkward humor, but jokes came across as extremely cringy.
“Last Christmas” has been getting a lot of buzz because of the big “plot twist” at the end, but I found it pretty predictable and figured it out halfway through the movie. The ending also didn’t resolve all the questions I had. Although some people thought that the twist came out of left field, it still didn’t make up for the hour and a half of unfunny, bland content.
If you’re looking for a funny and sweet holiday romance flick, don’t waste your time with “Last Christmas” and instead watch a Christmas movie classic.
Rating: 1/5 stars