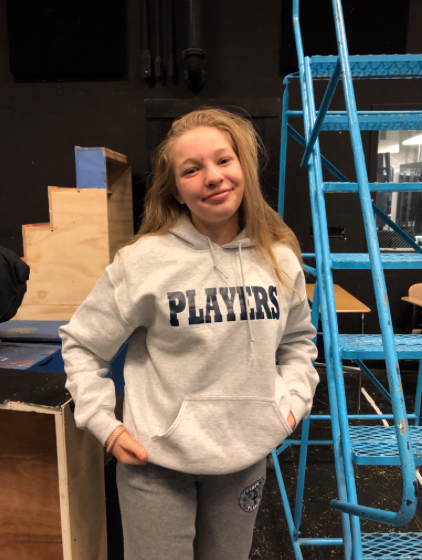 The hit show “Mamma Mia” is in it’s last week of performances this week, and it has been received enthusiastically by audiences

The Players have put forth many hours of hard work and dedication to this show, spending their time practicing dancing, singing, doing hair and makeup and so much more.

“There is one scene in ‘Mamma Mia’ where a bunch of the girls have on glittery eyeshadow and more put-together hairstyles, whereas the scenes that consist of island work have more of a layered black look,” Carly Curran ʼ22, a member of the hair and makeup crew said.

“Staples Players really benefited from the experiences of our choreographers, Rachel and Chris Myers, who both toured with the show for many years,” Colin Konstanty ʼ22, who plays Sky, said. “They even had Felicia Finley, who played Tanya for many years in the tour, come in and talk to us to help provide helpful insight into the world of ‘Mamma Mia.’”

But while Players stayed true to much of the Broadway production, they also aspired to switch things up a bit regarding their character adaptations.

“Each actor brings their own interpretations to the characters that differ from the original at times,” ensemble member Chloe Manna ʼ22 said.

Camille Foisie ʼ21 plays  Donna Sheridan, one of the leads. Donna is the mother of the main character, Sophie.

“Whenever I take on a role, I always make sure to first identify physically where they sit on me. How they walk, what part of their body they lead from, etc,” Foisie said. “However, I find the most important thing to do when taking on a role is to know and find out what connects me to that character.”

Maizy Boosin ʼ21, cast as Sophie’s friend Lisa, is another actor who has an example of a twist on how her character will be played.

“In the original, Lisa isn’t as much of a dancing role as it is in this one,” Boosin said.

The Players have dedicated their after school hours in order to shape the show.

“It was a lot of hard work and dedication in order to get to the standards that the whole cast and crew shoot for,” Manna ʼ22 said. “We continue to perfect and clean these dance numbers until the very last second.”

The actors and directors always take the basic storyline of the play and adapt it to the modern culture in some way.

“Staples shows are always amazing and unique in their own ways,” Evan Lukacs ʼ22 said. “Buy your tickets at StaplesPlayers.com.”