‘Joker’ Review: Send in the Clown 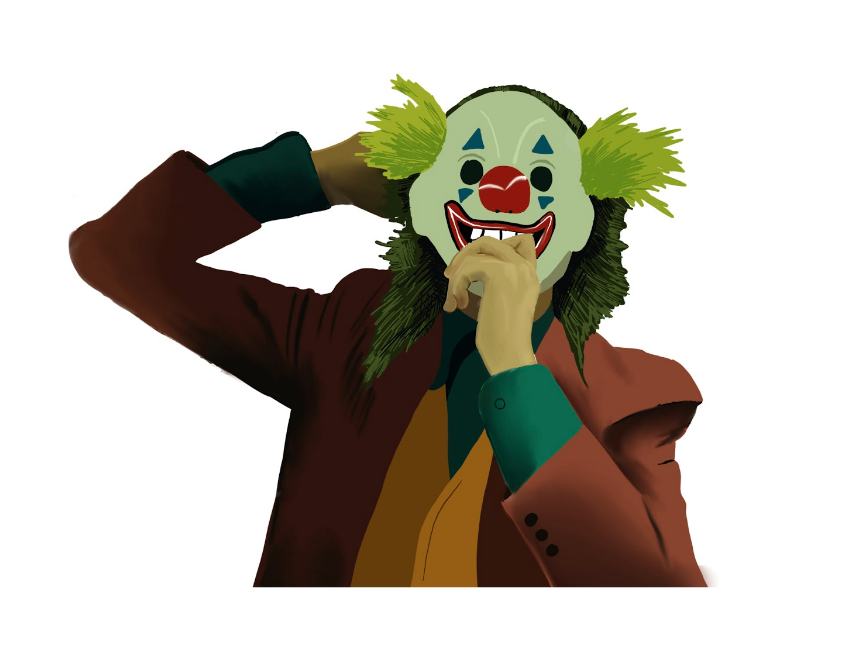 Drama/Thriller: movies designed to make you uncomfortable, a feeling that I do not exactly welcome into my life. When I’m sitting in my chair at a movie theater, I don’t enjoy being intentionally scared or in this case, thrilled.
However, in April, the first trailer for “Joker” was released, and I was presented with a serious dilemma. I was immediately intrigued by the concept of a full movie diving into a brand new origin for the joker, and explaining what exactly makes the iconic villain tick. I decided then and there that I would have to face my fears and go see a semi-scary movie.
On Oct 5, 2019, I was finally able to see the movie, and my bravery was rewarded. “Joker.” directed by Todd Phillips, is a very strong piece of film that evokes a full range of emotions in the viewer. From sympathetic moments to horrific realizations, the movie takes the audience on a nonstop ride.
“Joker” does a fantastic job allowing the character of the Joker to develop over the course of the movie. Rather than focusing heavily on the crazy things that the Joker is well known for, such as action-packed, elaborate and maniacal crime, the movie slowly builds to these notorious factors of the joker and focuses more on the factors that contribute to such a massive psychotic break.
The biggest questions I had about this movie were about Joaquin Phoenix in the starring role of the joker, and after watching the movie, the academy award nominee did not disappoint.
Phoenix’s performance is something to behold, his transformation from the broken man that is Arthur Fleck, to the unhinged force of nature that is, this iteration of the Joker, is fascinating to watch. While he does not quite eclipse Ledger’s iconic and legendary performance, Phoenix beautifully disappears into the role, and delivers a performance that has gotten him and this film serious Oscar buzz.
What makes the movie most disturbing is the fact that it is a triumphant story yet it celebrates chaos and madness. The beginning of the movie sees Arthur Fleck, the man behind the makeup, already in a very bad place, suffering from multiple mental disorders. By the end of the movie, Arthur is completely gone and the man left behind has plunged straight into the deep end of insanity and embraced the mantle of the Joker. The movie is filled with moments that forces the audience to feel for him and empathize with him, and as a result his descent into madness feels triumphant. This is also in large part due to the evolution of Arthur over the course of the movie. As his already depressing life gets worse, Arthur begins to let go of his sanity and the things keeping him that way, and as loses that sanity he becomes visibly happier. It puts the audience in a weird position because Arthur is the hero of the movie and his story follows the traditional rags to riches story, yet his accomplishments are horrible, awful deeds. Despite this, I still found it hard not to root for Arthur a little even though he is murdering people left and right, and turning an entire city completely on its head.
While this version of the Joker is different from his comic-book counterpart in many ways, the core essence of the character is there. This joker is wild and unpredictable, yet he still feels cold and calculated; he completely owns any room he is in. In the theater where I was watching the film, the amount of terrified audible reactions from other audience members during the third act was more than I’ve ever experienced in any movie. In one particular moment that was a call back to a moment earlier in the film, the Joker said something that made a person sitting behind me blurt out audible obscenities in the dead silent theater.
If you enjoy having reactions like these when watching a movie, then this one is for you. “Joker” is one-hundred percent a movie that will keep you on the edge of your seat, and at some points, force you to cover your face and watch between the cracks of your fingers. This is definitely a scary movie, but it is not scary in a horror kind of way. Rather, it’s scary in the sense that you never really know what is going to happen next. There are multiple moments where you think you know exactly what is going to happen and are lulled into a false sense of security, and then the movie makes a complete 180 degree turn, leaving you floored in your seat, skeptical for the rest of the movie and beyond. As a disclaimer, if you do not enjoy extremely dark and intense movies, this movie will not be for you. While it is produced by DC comics, and is based on a comic book character, this is not a comic-book movie, this is a movie about a man with serious psychological issues who happens to become The Joker.
I give “Joker” a score of 8.5/10.