Netflix’s “The Perfect Date” proves to be far from perfect 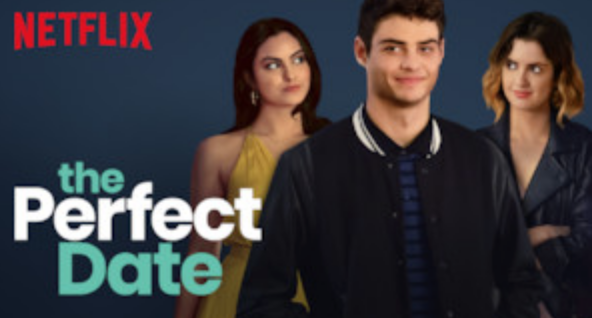 There’s nothing quite like shamefully binging a cheesy romantic comedy. It allows me to escape into the world where the popular jock notices the shy girl, two polar opposites find love and the sun is always shining.
Whenever Netflix releases one of these mindlessly-entertaining films, I’m the first one to grab a blanket and a bowl of popcorn and dive in. This was no different when Netflix released “The Perfect Date” last month. The movie stars Noah Centineo, who quickly infiltrated the hearts of teenage girls around the world after shooting into fame through similar movies such as “To All The Boys I’ve Loved Before” and “Sierra Burgess Is A Loser.” It also stars Laura Marano, who played perhaps the most unlikeable Disney character of all time: Ally Dawson in the show “Austin and Ally.”
Despite my prejudice against Marano, I chose to try to look past it and enjoy the movie. Centineo plays Brooks Radigan, a high school senior from Bridgeport who dreams of attending Yale and living a lavish life. In order to pay for admission, Radigan offers to be paid to escort Celia Lieberman, played by Laura Marano, to her prom in Greenwich. Lieberman is the typical pessimistic female protagonist complete with her resistance to wearing heels. This prompts Radigan to create an app where girls can hire him to be their “perfect date.” However, Radigan and Lieberman continue to pretend to date in order to make their crushes jealous. I would say “spoiler alert” but I’m sure you can guess what happens: Radigan realizes that the person he’s supposed to be with all along is Lieberman. Oh, and he decides to accept his full ride to UConn.
The first red flag of this movie was the protagonist’s attitude towards college. In the beginning of the movie, he compares UConn to “the girl down the street who eats in bed and smells like it,” while Yale is “smart, stylish but not flashy, cultured and speaks multiple languages.” I’m pretty sure that this is actually intended to be romantic as he ends up not only picking UConn, but the awkward girl as well. Radigan carries this arrogant attitude throughout the movie, causing Centineo’s usually-charismatic persona to fall short.
Additionally, the movie’s misrepresentation of Fairfield County will certainly cause anyone who is familiar with the area to be confused. It’s not surprising that Greenwich is portrayed as an over-the-top rich and fancy town, but there didn’t seem to be too much difference in the movie’s version of Greenwich and Bridgeport. Bridgeport is shown to be a slightly-less-nice version of Greenwich, with the only difference being the sandwich shop that Radigan works in.
Believe it or not, this isn’t the most angering part of the movie. The thing that made this movie completely unwatchable was the characters gross mispronunciation of “Darien.” I can’t capture their pronunciation, but take my word for it, it was like nails on a chalkboard. If you’re looking to be annoyed and confused yet somehow bored for an hour and a half straight, this movie is for you.