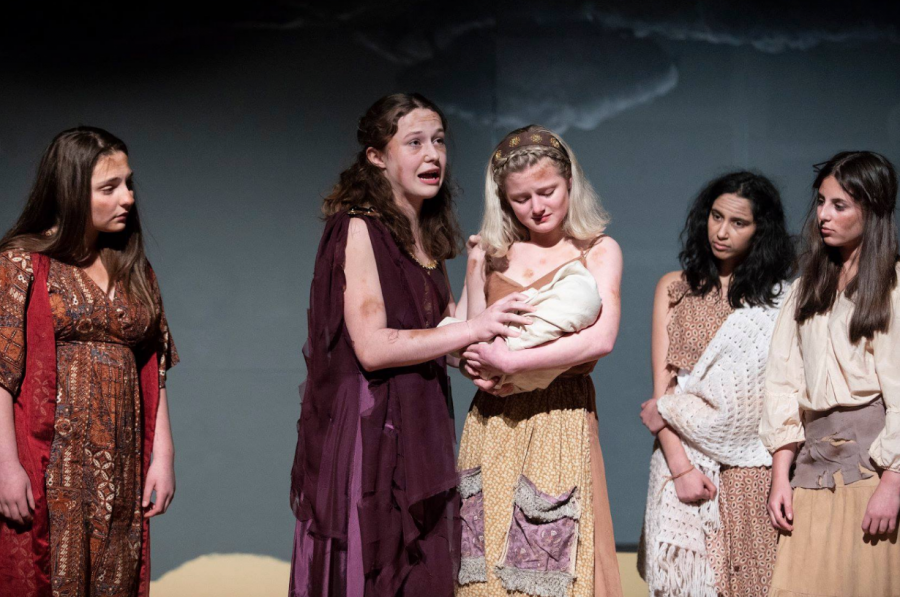 Leading actors Lulu Dalzell ’21 (playing Hecuba) and Emily Desser ’21 (playing Andromache) cry out in anguish over the loss of a child. “The Trojan Women” highlights to tragedy of the Troy women left behind after the Greeks have demolish their city.

Whether it’s the childhood fables about the devious surprise attack of the Trojan Horse or tales from the heroic Odyssey, most people have heard the Greek side of the Trojan War. But few have encountered the story about the tragic aftermath of the bloody battles of Troy. Travelling back to ancient Greece, the Staples Players brought to life “The Trojan Women” as their student-directed, first studio production of the year this weekend from March 1 to March 3 at Toquet Hall.
Written by Athenian playwright Euripides around 415 BCE, “The Trojan Women” is a tragedy that is historically based on the Greek seize of the island Melos. This final trilogy centers around the fates of widows Hecuba, Andromache, Cassandra, Helen and the surviving women of the kingdom. The modern adaptation used by Staples Players, created by Ellen McLaughlin, continues to blend both Greek myths as well as emotions of grief and sadness.
This completely student-run production was directed by Josh Horowitz ’19 and Violet Cooper ’21. In the early stages of choosing what plays they wanted to put on, “The Trojan Women” stood out as an incredibly touching story.
“The core of the material was written 2400 years ago,” Horowitz said. “And I was just floored by the prescience of the whole thing and how applicable it was today.”
While many Staples Players plays are lighthearted and comical, the smaller studio productions allow the cast to explore deeper, more emotional genres of production.
The play also allowed opportunities for underclassmen to gain experience delving into their characters. “I got to really create a character that I could call my own,” Anushka Rao ’22 said, who was a member of the Greek Chorus in her first Staples Players studio production. .
Many characters in the play ultimately have ill-fated endings–whether they are sold off into slavery or surrounded by the deaths of their loved ones. Acting as one of the main roles in the play, Hecuba, Lulu Dalzell ’21 initially struggled with finding a connection to her character.
“The subject matter is so upsetting and so hard to put on especially as a high school student,” Dalzell said. “But I’m happy that I could get into my character and really discover her emotions throughout the show, even though she lived such a different live than I do.”
Another challenging aspect in adapting a Greek tragedy was reading and analyzing a script translated from ancient Greek,as well as deciphering the word choice and language of the characters.
“Personally, it was more difficult at the start of the process to really find that intimate connection with the character I was playing,” Emily Desser ’21 said. “Her story and setting is miles and miles from my own.” In the play, Desser played the tragic character of Andromache, who loses her husband as well as her beloved son throughout the story, in addition to being unwillingly wed off as a concubine to a Greek man.
Even director Horowitz had found it difficult to maintain the balance between acting and raw emotion.
“Rushing it means you’re either going to be faking onstage, or you’re going to go too deep into your own emotions and you’ll get stuck there.”
Still, the cast praised Horowitz on his professional advice and creating a sense of teamwork and unity.
During the showing, the cast seamlessly brought to life the melancholy tone of the play, from dressing on the costumes of colorless, battered, war-torn togas as well as creating the set of a destroyed, crumbling city in ancient Troy.
“One of the themes that I enjoyed most in this show was that it is centered around women,” Violet Cooper ’21 said. “In the end, the women have to rise above the misery they have already endured, and face their new lives of degradation with wisdom and integrity.”
However, transforming this small stage into the island of Troy was not an easy process. Throughout the long rehearsal planning, the cast had encountered several obstacles. In just under a month, the cast and tech crew struggled with a lack of space as well as time, having to prepare the stage just three days before the opening night.
“It was a challenge considering that we had such a small budget,” Dalzell said. “Also getting rehearsal time and rehearsal space in the auditorium lobby because it was very loud during school.”
Ultimately, however, the show was regarded as a huge success by the members of the play. One of the most rewarding aspects of the show was displaying their work and effort in front of a live and engaged audience.
“Putting the show up in front of a real audience was really rewarding and to see a genuine reaction from them gave the show a whole new purpose,” Rao said.
Additionally, their captivating emotional performance had touched the hearts of many audience members.
“One of the accomplishments over the weekend was probably having people come up to us after the show and having them say that the play really meant something to them and how beautiful it was,” Emma Saxon ’21 said (playing Aurelia in the Greek Chorus).
Throughout the entire process from rehearsing to performing, the cast and crew developed a strong bond with each other.
“As a senior, and as someone who’s very quickly coming to the end of high school,” Horowitz said, “I’m glad it was different, and I learned a lot about myself through this play.”