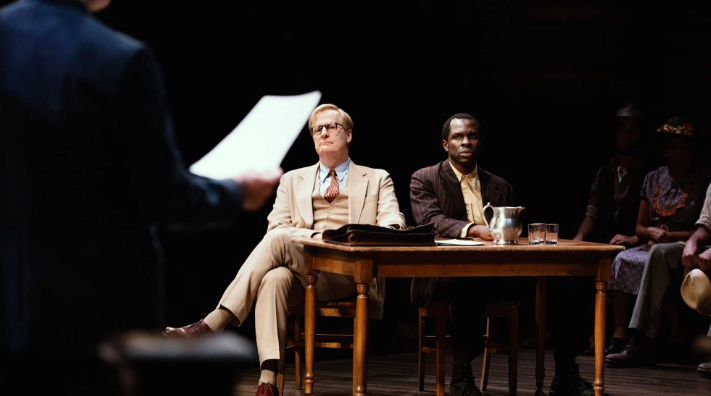 "To Kill A Mockingbird" first hit the Broadway stage on Dec. 13, 2018. The play runs for two hours and 35 minutes and stars renowned actors such as Jeff Daniels as Atticus Finch.

The chances that you escaped the three glorious years of middle school without analyzing every page, paragraph and sentence of Harper Lee’s “To Kill A Mockingbird” are at an all-time low in this day and age. While many high schoolers haven’t scoured the pages of this moving tale in what seems like ages, a select few got to relive it, but this time, in a theater.

The Staples Players, known for putting on near-Broadway caliber musical productions of their own, took a field trip during the school day on Feb. 6 to New York City. While there, the group got the chance to watch this 1960s classic come to life on the Broadway stage.

The Players had a variety of opinions on why this play in particular was chosen for them to view on Broadway. Jamie Mann ’21 believed that the popularity of the book in the middle school curriculum, as well is its powerful messages, were certainly influential factors in the choice.

“There are still implicit biases in the world that affect minorities every day,” Mann said. “As an actor, I learned how certain mannerisms can have such an influence on how convincing a certain character is.”

Similarly, the ever-relevant messages of morality conveyed through the play were what Carly Dwyer ’20 and AnnaMaria Fernandez ’20 thought were especially prominent and a primary reason for viewing it.

“The lessons this story tells still holds true to today,” Dwyer said. “You really understand that sometimes you have to put yourself in someone’s shoes.”

“I think the overall message was amazing,” Fernandez said, “the way the story was told made me feel that certain topics will always be relevant.”
The topic of racism that the story is grounded in was the theme that Tomaso Scotti ’20 cited as an essential component of the plot that stuck with him in addition to the beauty and simplicity of the set design.

“In the political climate we live in today,” Scotti said, “The trial of a black man in the 1930s probably shouldn’t be as relevant to today, but it is.”

Lexi Levins ’19 not only cherished the themes that were conveyed, but believed that the play served as an important form of activism. Being able to watch it in a theater, she said, encouraged the Players to value the messages of racial equality.

“The story of ‘To Kill a Mockingbird’ has had a huge impact on me, and I will keep the messages I received from the play close to my heart as I live my life,” Levins said. “The show was inspirational, to see a small cast come together to tell such an involved and complicated story was mesmerizing.”

In addition to the messages highlighted through the play, the performances from the actors were what struck Mann as one of the best aspects of the show.

“All the characters were able to bring the story together,” Mann said. “What I loved most is how flawlessly every character was portrayed, so much so that I came out not thinking one was better than the other.”
Though the strong performances from the actors were powerful, Antonio Antonelli ’19 pointed out the fact that reading the story in the past made the live performance even more special.

“Being able to see the transfiguration of a piece of literature into a visual art form was a fascinating experience,” Antonelli said. “The plot remained the same, however, the story was adapted to enhance the experience of the viewer.”

Though each Player cited various elements of the play as one that resonated with them most once they left the Broadway theater, having the opportunity to watch this classic novel as actors left them all feeling inspired and moved.

“Creating art, such as this play, has the power to change the way you think and see the world,” Levins said. “As an artist you have the ability to make a difference and reach a wide audience. Seeing a classic American novel come to life on stage was a privilege.”