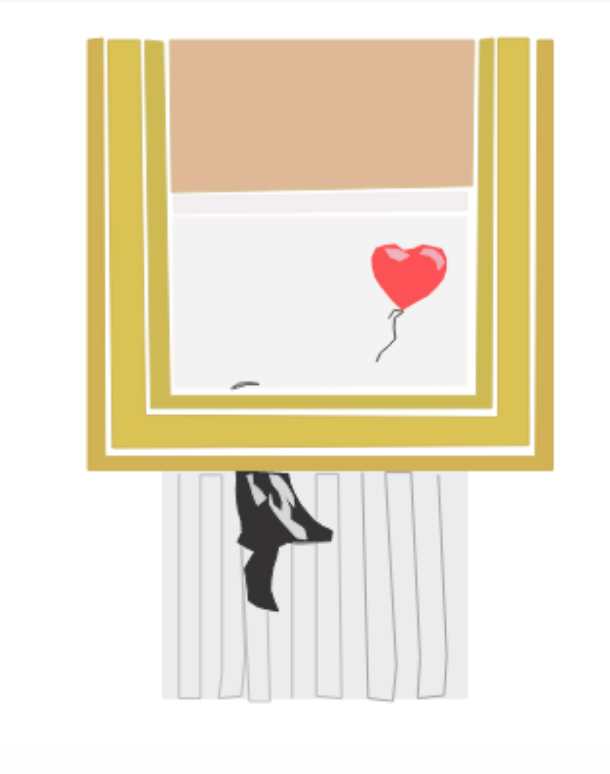 For the first time in art history, a piece of art was created live when English street artist Banksy’s 2006 painting “Girl With Balloon” shredded itself just moments after it was auctioned off for $1.37 million at Sotheby’s auction in London on Oct. 5.

Quickly after the auctioneer’s gavel struck, the painting fell about halfway down and out the frame, with the exposed bottom half shredded in clean vertical strips, creating “Love Is in the Bin,” a whole new version of the original piece.

Being known for successfully concealing anonymity for over 20 years, Banksy’s stunt was one of the first moments in which a prank of this degree is executed in public.

“I would be upset if I was the one who bought it because I bought a really nice painting,” Kalina Kinyon ’20 said. “But it’s probably worth more now that it’s more unique.”

The anonymous buyer, in a statement on Oct. 11, expressed similar feelings, saying it was shocking, but a memorable moment in art history and ultimately decided to continue with the purchase at the same price.

In the same statement, Sotheby’s officially declared the painting a 2018 work, retiring its 2006 title.

Following the incident, Banksy took to Instagram first with a picture captioned “Going, going, gone…” They later posted a video of someone assumed to be the artist themself installing the shredder, explaining that they had built it back in 2006 specifically for the instance of it being auctioned off.

They captioned the video post with a quote from Picasso, “The urge to destroy is also a creative urge.”

The biggest mystery, perhaps, is that many are left believing that Banksy himself was in the room triggering the shredder and recording the video.

“I think it could have been Banksy,” Grace Trzeciak ’19 said, “He’s been anonymous for so long, it makes sense that he’d finally make a big public stunt like this in plain sight.”

At first, this seems to be all a silly prank. But some are left considering whether “Girl With Balloon” was just an unfinished form of “Love Is in the Bin,” the final, intended piece.

“Perhaps Banksy was trying to make a statement about the permanence and preciousness of art,” art teacher Angela Simpson said. “[It] may be valued more for the experience of the moment than for the end product.”