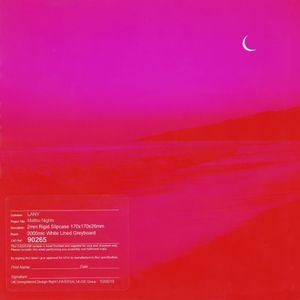 Dreamy, airy and packing a heavy emotional punch, LANY’s new album “Malibu Nights” is their best one yet. The band titled this new stage of their development as artists as “the moon era” which perfectly describes their new, darker but still dreamy aesthetic.

The bit of weight or darkness in this album is likely due to the fact that lead singer Paul Klein has been using these songs as a way to get through his breakup with pop singer Dua Lipa. Although she is never directly mentioned, the lyrics indicate a breakup and Klein has said on his Instagram that he wrote these songs around the time of the breakup.

As a newer band that’s stepping into the limelight, it’s good to see LANY already evolving and making their sound better. Their last album titled “LANY” lacked the passion and emotion that “Malibu Nights” has so much of. Not to say their last album wasn’t good, but it felt like it didn’t have a story or something more to accompany it.

On the other hand, the tracks on “Malibu Nights” are put in an order that reads like the story of someone post-breakup. It starts with track one: “Thick and Thin” where the overall message is just sadness and disappointment. There’s even a sense of betrayal that you could truly believe someone would be there through thick and thin, only to realize they’ll abandon you.

As Klein moves through the stages of his breakup, the emotions in the songs change. By track six, “Run”, there’s now a sense of anger and revenge. He sings, “Your family and all your friends, on my side,” almost talking directly to the person who broke up with him to prove he was in the right once and for all.

The album ends with the best song on it and the album’s namesake, “Malibu Nights.” By this point, Klein isn’t wearing the same brave, stone-cold face that he has in “Run.” Instead, he lets people see his sadness. He’s no longer trying to make singles for the radio; this track is truly for him.

The lack of instruments puts a sole focus on Klein’s vocals and the words he’s singing. By the tone of his voice you can hear his desperation to move on and to get better, but also his frustration that he can’t do so.

“There’s no reason, there’s no rhyme. I’ve found myself blindsided by a feelin’ that I’ve never known, I’m dealin’ with it on my own” he sings, in a voice much slower than he has on any song.

“I love how passionate it is,” LANY fan Geena Abrams ’20 said. “I know he feels something strong which makes his listeners feel something too. That’s what real music does to you,”

The passion in his voice and the instruments combine so well throughout this whole album. It’s one of the most well made breakup albums out there and is definitely worth a listen, even if you’re not going through a heartbreak.