HQ trivia is the game show of the future 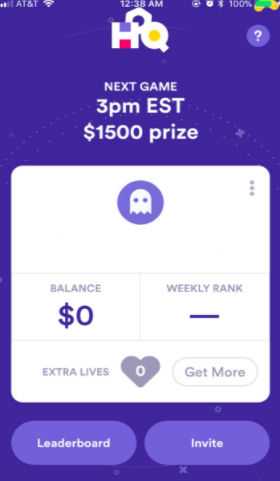 Five, four, three, two, one and the game begins. Hundreds of thousands of players log on to compete for the prize. There’s a constant rush of rapid, flashing moving images in all areas of the screen, but the players are focused. They came there to win.

In August, an app founded by the creators of Vine was released, called “HQ Trivia”. Since then, its following has skyrocketed to at least 600,000 viewers daily as stated in Here’s Why HQ Trivia, the App That Could Replace Game Shows, Is So Popular. According to Vine’s Creators Want You to Win Free Money With Their New Trivia App, the app was inspired by “Jeopardy” and other game shows.

“You have to answer a certain amount of questions right and you win money,” Abby Greenblatt ’18 said. Two times a day at 3:00 p.m. and 9:00 p.m. a trivia is held, and there is a set amount of money for those who answer all of the questions correctly. But, if a player were to get one question wrong, they are eliminated from the game.

The player must also strategize because players have only ten seconds to respond. “You have a short amount of time to answer,” Jessica Schwartz ’19 said.

It is free for anyone to join, but players can win however much money is offered for that game. The starting amount of cash can be high, like $20,000 high, but it changes everyday so it is never the same. The only catch is, the money is split up among the winning players, so it can be a lot less that the full amount being distributed. The app links directly with the players’ paypal account, so once they reach $20 they can transfer the money directly from the game into their account.

“If you get them all right, then you get a certain amount of money that they’re doing, but then you don’t actually get all that money because it’s split up between the people,”  Kayden Obsitnik ’20 said. “So you might end up getting only three dollars.”

Players can accumulate additional lives that enable them to continue playing after answering questions incorrectly, but can only use one life per game. They can achieve these lives by inviting others to play with their referral codes.

“One of my friends told me about it,”  Obsitnik said. “They told me to use a referral code.”

If eliminated or not, the players learn from the unusual and unique questions it presents.