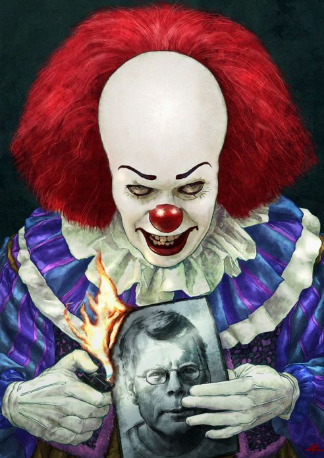 When most people think of autumn, Halloween and apple picking are two of the most popular activities that come to mind. However, people tend to forget the impressive horror movie selection offered in theatres during this season. “It”, “Flatliners”, “Friend Request” and “Mother” are four of the most anticipated this fall.

“It” highlights a group of seven kids who go on a mission after realizing that many local children in their town have gone missing. The cause of the disappearances is an evil clown named Pennywise who was able to transform into the children’s “biggest fears.” The children, who name themselves the “Loser Club,” decide to defeat the clown. The movie has gotten a lot of praise for its humor aspect. “Watching the movie was terrifying, but at the same time I could not stop laughing. The one liners really helped cushion the jump scares,” Madison Galley ’20 said.

The movie scored an impressive 85 percent on Rotten Tomatoes with many agreeing that the movie was the perfect combination between scary and humorous.

“Flatliners” revolves around five medical students who want to understand what life is like beyond living. The students purposefully give themselves heart stopping experiences so they can experience what happened in the afterlife. “Honestly the movie was really weird. I was not really sure what I went into and I came out still unsure of what I saw,” Justin Bacon ’20 said.

The movie received a four percent on Rotten Tomatoes, suggesting that most of the public agreed with Bacon.

“Friend Request” features a college student who accepts a Facebook friend request from an unfamiliar student who is characterized to be an outcast. Although the protagonist is portrayed to be far more popular, she attempts to make friends with the girl until discovering her true, dangerous intentions. The protagonist is soon terrorized by her spirit as a result of the student’s suicide.

The movie received bad reviews on Rotten Tomatoes, earning a 17 percent, and students expressed similar feedback. “I honestly didn’t like it,” Julia Billotti ’18 said. “I felt like it was trying to copy the movie “Unfriended,” and a lot of the scenes were really unrealistic and aren’t that scary.”

Frank Wilkins from Reel Reviews shared a similar review, describing the movie to be “An ill-conceived, poorly executed, total mess of an attempt to mine terror from a popular cultural phenomenon.”

“Mother” is about a couple who lives a peaceful life in the country until their usual routine is disrupted by another couple who shows up at their house unexpectedly. Being a psychological thriller, the movie requires hard thinking throughout, with many plot twists included.

“Mother” received a 67 percent on Rotten Tomatoes, ranging from a majority of positive reviews and some negative. Lindy Sinclair ’18 explained her positive experience, saying, “It was a little confusing to follow, but once you figure out all the components, it’s so interesting.”

As Rotten Tomatoes showed, not all agreed with Sinclair. “For me, the confusing parts overtook the movie. I was sitting there the whole time trying to figure out what was going on and for that reason it was simply unenjoyable,” Luke Welch ’19 said.
Brian Tallerico from Roger Ebert writes, “At times terrifying, at times riveting, at times baffling, and at times like nothing you’ve ever seen before,” reiterating Sinclair’s opinion towards the movie.
Based on the student and critic reviews, it’s safe to say this season’s horror movies are either a hit or miss. Regardless of the movie’s success, you can always grab an icee and movie theatre popcorn during your experience.