The next Bachelorette sets new expectations for the show 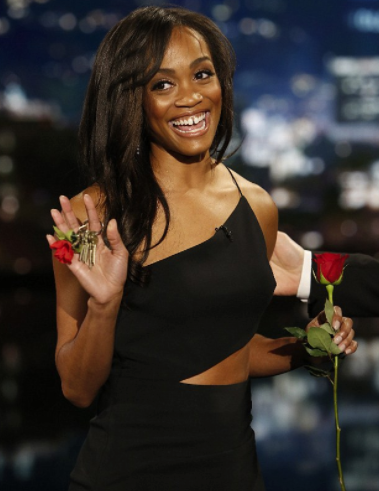 The Bachelor series has been an entertaining reality show for millions of Americans for over 21 seasons. Twelve seasons ago ABC started a reversal of the show called The Bachelorette, where the men compete for one woman’s love, rather than the women competing for the one man.
In all of the seasons of both of these shows there has only been one Bachelor in 2013 who was not caucasian, Juan Pablo Galavis. But, it was announced on February 13 during an episode of “Jimmy Kimmel Live!” that Dallas lawyer Rachel Lindsay, who is currently on Nick Viall’s Bachelor season, will be the show’s first black Bachelorette.
Many fans have complained about the timing of this spoiler because she is still a contestant on the show that Viall seems to have a lot of interest in. Amanda Samuels ’19 was “frustrated because there are only a few girls left and now I have a good idea of who is going to win since I know that Rachel won’t.” Others have also wondered the network’s reason for releasing this information so early. Samuels believed that “they might have announced it early so that they’d have more time to cast the bachelors for her season.” Katherine Coogan ’17 believes their timing was in order “just to keep everyone’s attention on the franchise.”
Despite the ruckus it caused, people were glad to see ABC increasing its assortment of people on one of its most popular reality shows. Sophie Attkiss ’19 believes that from what she’s seen “there has been a lack of diversity on the show.” Coogan agrees that while they try to incorporate people of different races, they remain unsuccessful. Coogan also brings up the point that “they [the show] extremely lack body diversity, as everyone on the show has a thin and fit physique and would be considered conventionally beautiful, which makes it more unrealistic and honestly less interesting.”
ABC has received criticism before about its lack diversity on the show, but creator Mike Fleiss believed in accepting only the people who came forward to be on the show who would click the best with the Bachelor or Bachelorette. He believed that searching for specific races for both men and women felt like “tokenism.”
Aside from the fact that she is black, her reason for being on the show is like every other Bachelorette before her, “I’m ready to find love, find a husband,” Lindsay explains to Kimmel directly after the announcement. Gemma Price ’19 is just as excited. “I’ve always liked Rachel and she seems like a genuine contestant. I’m excited to see what happens during her season.”