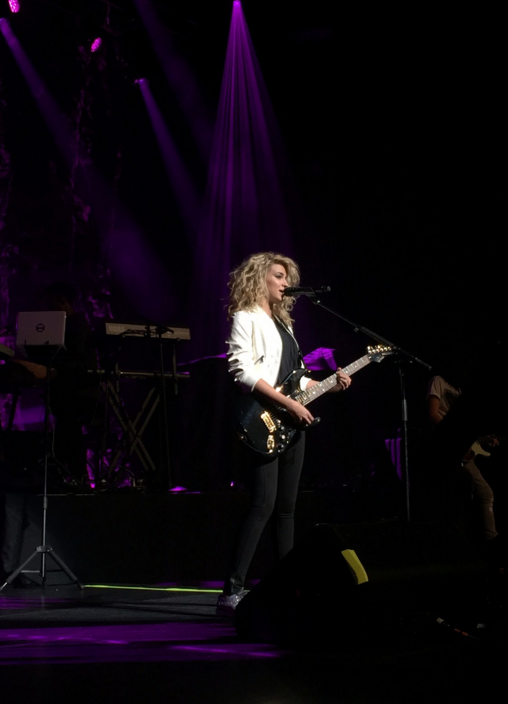 Rising pop singer, Tori Kelly, performed her new album, “Unbreakable Smile” at Beacon Theatre, on Friday, April 29th. With a pair of sparkling shoes, a guitar, and her mesmerizing voice, Kelly put on a show for the 3,000 fans who were out of their seats, dancing.

Beginning at 8 PM, teenagers rushed inside the arena to get their seats. As soon as opening act, Thirdstory, came on, the trio did not fail to entertain the crowd. Impressing the room with their perfect pitched harmonies, they performed different songs from their album, as well as some covers.

After an hour went by, Kelly opened the show with “Unbreakable Smile”. The entire room knew all the words and sang their hearts out as she performed. Shortly after, she sang her singles, “Should’ve Been Us”, “Nobody Love”, and “Hollow”.

Half way through the show, Kelly made a special performance for the fans who have been with her since the start of her career. Previously being known on Youtube, Kelly performed her famous covers of, “Thinking About You”, “Suit and Tie”, and “Pretty Young Thing”, as a tribute to her loyal followers.

Although the show lacked the energy of backup dancers and the support of backup singers, Kelly’s powerful voice was enough to leave the crowd speechless. “I was surprised when she sounded even better live than on her studio version,” Sanna Ten Cate, ’18 said. “Even though it was a very ‘raw’ show, she didn’t need anything else but her voice to impress the crowd.”

Once the show came to an end, Kelly went out of her way to interact with fans. “I couldn’t believe that I actually got a photo with her. Every other concert I’ve been to, the main act never really makes an effort. It was really generous.” Julia Bilotti, ’18 said.

Overall, the show was a blast. Her vocals were not only flawless, but able to fill the entire theatre with an abundance of energy. The concert, being a total of two and a half hours, was a perfect duration of time. Without a doubt, we’ll be trying to purchase another pair of tickets to her Unbreakable Smile tour…you can too, at http://www.torikellymusic.com/.