Vans sneakers glide through the halls 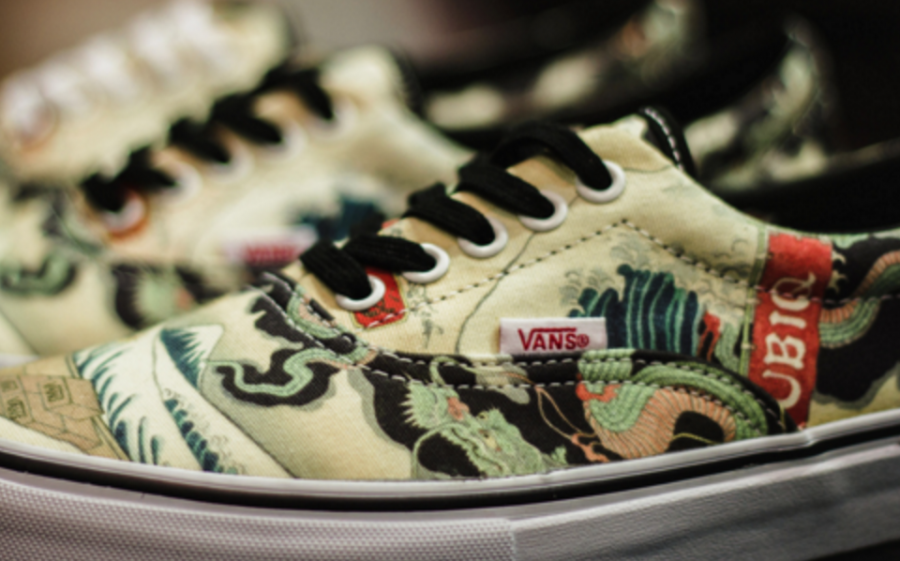 Vans, an American shoe manufacturer is commonly known for their slogan “Vans off the wall”; however, on Mar. 16, 1966 when the company first began selling shoes on the streets of Anaheim, California, no one could have expected these shoes to jump off the wall as fast as they did.

Neither could have co-founders Paul Van Doren and James Van Doren, twin brothers’ who originally named the company The Van Doren Rubber Company.
On the first day of business for the Van Doren brothers, 12 customers purchased Vans deck shoes. Commonly referred to today as the model “Authentic,” they maintain the original stitching and design that the Van Doren brothers created. The company displayed three styles of shoes, however, they had only manufactured display models without any inventory ready to sell—the store rack boxes were actually empty.
Nevertheless, the 12 customers selected the pair they desired, and were asked to return later to pick up their purchases. The Van Doren’s frantically rushed to their factory where they went on to manufacture the selected shoes. When the customers returned that afternoon to pick up their shoes, they were amazed at the quality and comfortability of the shoes.
Since then, the company has blossomed into an international success. Carrying more than just sneakers, the company also sells shirts, jackets, pants and even sunglasses.
Zak Ahmad ’17 loves Vans for their comfort and sheer style.
“I have three different pairs of Vans and I love to rotate them throughout the week. They are extremely comfortable and fun to wear,” Ahmad said.
Ahmad is not the only one who purchases these pairs of sneakers for their comfortability.
Lauren Clement ’16 owns two pairs of Vans because of how great her feet feel in them.

“My feet feel like I’m walking on clouds. I love wearing my Vans to school everyday,” Clement said.

Although the shoes are very comfortable, they are not the only comfortable piece of apparel that the company sells.

Harry Garber ’16 is not only a huge fan of Vans sneakers, but of their clothing as well.
“I enjoy wearing my Vans, they are nice,” Garber said, “But what I like more is my Vans jacket. It’s been great keeping me warm this winter. I also have a few long sleeve t-shirts that I love wearing out.”

Sticking true to its skater roots, Vans also possesses key essentials for all skating gurus.
The company sells shoes that have extra sticky soles, so they can grip onto the board better. Vans also a skate team which consists of professional skateboarders that they sponsor. Some of these include Anthony Van Engelen, Gilbert Crockett and Geoff Rowley.

What started out as a small corner store in downtown Anaheim, California, has erupted into an international clothing and sneakers company. Known for the vibrant colors and comfortable feel, these shoes are in fact “off the wall.”