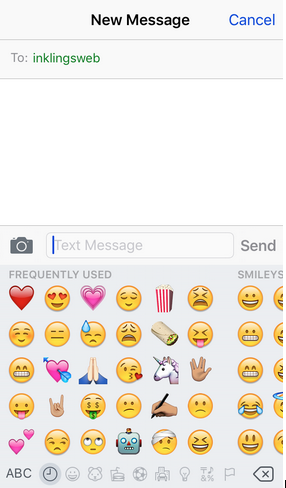 Apple’s done it yet again. A new array of emojis have just been released with iPhone’s iOS 9.1 update and it’s all the hype here at Staples.

“It’s really exciting because there are so many new ones that come in handy and are very useful,” Erin Munley ’16 said.

When you’re at a loss for words, an emoji can always get your point across.  But there were a few necessary emojis that ceased to exist until this update.  Last year staff writers Renee Weisz ’17 and Alice Hickson ’17 wrote an article on “Top five essential emojis that need to exist” and it looks like they foretold some of these future emojis.

Weisz and Hickson’s recommendations for a turkey, a cheese, and a multitude of new sports emojis are included among the 184 new emojis within the update.

Other emojis include the much anticipated middle finger emoji, along with the sign of the horns, unicorn, burrito, badminton racquet, golfer, a peace symbol, and much, much more.

Sydney Malkin ’17 says her favorite new emoji is the one with the rolled eyes,  “I feel like it applies to so many situations over text and now I can express that in my response.”

Although many more emojis have just been released, Staples students still have some requests for future iOS updates, “I think they should create a pretzel emoji because they are a lot of people’s favorite food,” Jonas Piekara ’16 wishes.

There’s an endless amount of potential emojis that can be created, but Apple did a good job on this update. They made some much anticipated emojis that I know I’m excited to start using and I’m excited for what future updates have in store for us.

Hope you all enjoy the update!