Griffin sings her way to the spotlight 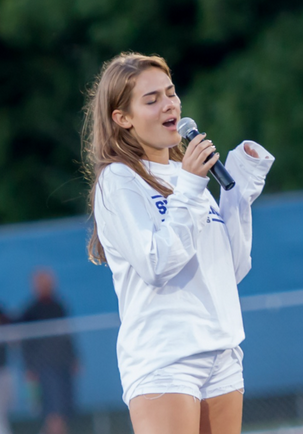 Football season is one of the most popular sports seasons at Staples. Friday night lights have the bleachers filled up with students and parents. But, the talent is not all in the players.

No game can start without the Star Spangled Banner. The sound of this national ritual allows the riled-up crowd to take a moment of silence in hopes for an exciting win ahead.

But who holds this important and nerve racking position? Kate Griffin ’17 has taken the stage multiple times by belting her heart out in front of hundreds of fans before proceeding back to the stands.

Having sung for numerous games over all three of her years at Staples, Griffin also previously participated in the school choir her freshman year. That year, Griffin had a solo in the Staples winter candlelight show where Marty Lisevick, the athletic director at Staples, contacted her to sing for her first game.

Ever since then, she has started off almost every game with the star spangled banner and now describes the feeling as “exhilarating.”

“After singing at multiple games, I get more excited than nervous to perform,” explains Griffin ’17.
Griffin hopes to continue taking part in as many Staples sports games she can and share her talent with the many rambunctious fans that fill the stands.