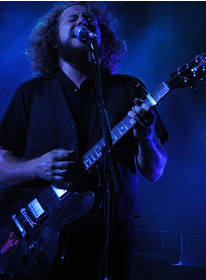 With cascading ethereal acoustics that wash into soul infused classic rock jams, My Morning Jacket’s seventh studio album “The Waterfall” is much like a waterfall itself–calming yet roaring at the same time.

The Louisville based band, who is set to be one of the main acts at this year’s Governors Ball Music Festival, told Rolling Stone magazine that “The Waterfall” is a metaphor for life beating you down and having to will yourself back together. This is evident as frontman Jim James upliftingly hums to open the album, “Roll the dice, set sail the ship, and all the doors will open.”

What was beating James down was his love life. On “Thin Line” he sings in a smooth falsetto over wailing guitars, “It’s a thin line/ Between loving’ and wasting my time.” He again tells of relationship woes on tear-jerking folk tune, “Get the Point,” as he bluntly croons, “Day dreaming of leaving/ I only had to do it.”

Though “The Waterfall” is largely a break-up confessional, the heart-torn James stills manages to find an optimistic direction by returning to nature on many of his tracks for some spiritual rejuvenation.

The mystical and poetic “Like a River,” has a certain warm glow to it that is simultaneously haunting and freeing. “Tropics (Erase Traces)” has an equally tribal sound yet with a Neil Young-esque rocker flair.

Other notable tracks include “Compound Fracture,” a Passion Pit-Fleetwood Mac style hybrid that meets halfway between 70’s grooviness and 80’s pop synth. Its breezy feel is prime for open window car rides where as the bluesey “Only Memories Remain” is perfect for the back of the car (wink).

Surprisingly, the album’s most popular song, “Big Decisions,” is easily its most underwhelming. The song relies too heavily on the traditional pop rock formula and the abrupt beat destroys the flowy feel that is present in the rest of the album.

While “The Waterfall” may never rival My Morning Jacket’s killer albums “It Still Moves” and “Z,” there’s nothing I’d rather listen to during a trek through the mountains or a fireside campout.