Bingewatching a show on Netflix 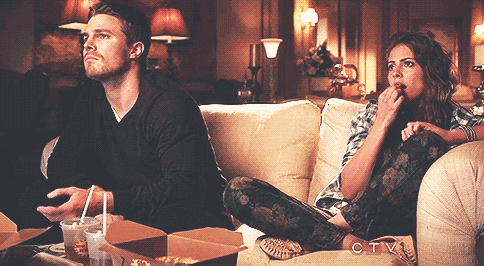 We’ve all been there. Going on 2 am on a Saturday (or Tuesday) night, in a literal cocoon of blankets and popcorn crumbs, starting the last episode of your current binge show on Netflix. Don’t pretend this hasn’t happened to you.

As you continue to descend into summer, as temperatures rise and motivation tanks, inevitably, new shows come up on Netflix. The desire to do work tanks, and the appeal of bingewatching “Lost” because everyone says it was amazing increases. In order to avoid the crushing disappointment that comes with finishing an elaborate saga after months on an emotional rollercoaster, I’ve broken down the six stages of Netflix bingewatching for you.

Choosing one of Netflix’s “Suggestions for you” hoping the show isn’t some trashy soap opera and realizing that it’s my new favorite one:

2. Getting about three seasons in, head over heels for my new show and realizing the zombie that I’ve become:

Is it just me, or is it insanely difficult to find that perfect position to watch tv from? I usually end up with my limbs splayed everywhere, basically a human pretzel. Then Netflix asks are you still watching? Yes, maybe I haven’t left my room in twelve hours but yes, I’m still watching.

3. Approaching the final season, knowing that there are less than 12 episodes left before what might be the best show ever abandons me:

It hits you like a brick wall. One second, I’m a naive youngin’ looking at at least four months worth of tv, and suddenly, with only one season left, I’m astounded as to how I managed to watch so much tv in so little time.

4. “One Tree Hill” ended with an episode that perfectly closed every storyline, and there were no obvious plot holes. I still was, however, completely unprepared for the end of it. Netflix tried to suggest something that would be even close to the excellence of OTH, but I couldn’t wrap my head around not watching Lucas, Peyton and Brooke everyday. It’s almost worth watching the whole series over again just so I don’t have to start something new.

5. Browsing through Netflix the next day hoping any of the suggested tv shows could even try to live up to my expectations:

No. For the last time, no. Netflix, I do not want to watch “Sons of Anarchy” or the most recent trashy rom-com that came out. How they even arrived at the two of those recommendations together baffles me. I want to watch something so dramatic I would forget all about the Nathan and Haley drama of “One Tree Hill.”

6. Accepting my fate and choosing some ridiculous new show in the hopes it might be as good as its predecessors.

Let’s hope “Scandal” is as good as everyone says. I might just watch Grey’s Anatomy again anyway.