Stand Up Comedy Night attracts many students once again 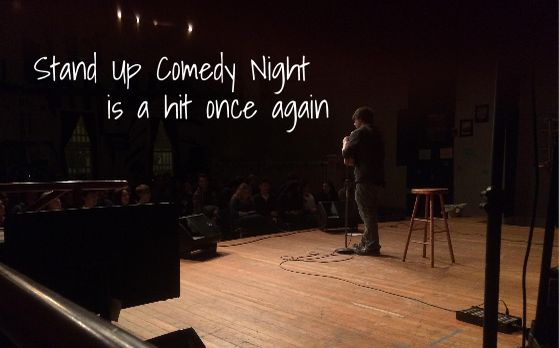 On Friday, March 6 Toquet Hall hosted the Stand Up Comedy Night where students and professionals came to perform and make people turn over with laughter.

This event has been going on for years, attracting many students and viewers. Students of all ages can sign up for the act. This year’s line up consisted of Justin Cheng ’16, Lucien Formicell, Nick Ribolla ’16, Michael Mathis ’15, and professional comedian, Dan Bougler.

The night was full of laughs. The skits while short, each were unique and personal which intrigued the audience even more according to Connor Mathewson ’16.

“It was really funny at points,” Mathewson said. “It was also pretty cool to see fellow classmates on stage”

Many of the audience members knew the comedians which made it especially fun. Finally they had permission to laugh at their friends.

One veteran comedian was Nick Ribolla who had also performed in the comedy night in the spring of 2014 as well as in the fall. Ribolla enjoys the shows because they can push the boundaries of some jokes that can make the audience crack.

“I like to keep it classy yet crude,” Ribolla laughed. “If there’s something that may be sensitive, I won’t make a joke about it, but we like to push the envelope.”

The jokes continue to attract students and friends of all ages to the show. For some students, like Riley Thrush ’17, it was their first time. Nevertheless they really enjoyed the show.

“I thought it was really cool to see kids from our school get up on stage and make everybody laugh,” Thrush said. “Overall I thought the event it was very entertaining.”

The Stand Up Comedy Night continues to make students laugh year after year and there should be more shows expected in the fall and spring of next year.