Where to find this winter’s hottest beverages 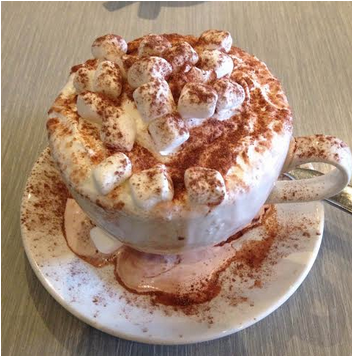 The Granola Bar’s foamy, frothy mess is both easy on the eyes and on the taste buds.

During the chill of the past month, students have been in pursuit of the perfect cozy drink to thaw their rosy cheeks and warm their numbed fingers this winter. The ideal Westport café, however, remains under dispute.

The Granola Bar is notorious for its “Instagram-worthy” menu. Although I don’t believe the actual taste of the food lives up to the promise of their appealing presentation, the drinks are by far superior to many of Westport’s cafés.

I’m not going to lie: coffee is coffee, and I enjoy a good cup o’ Joe no matter where it’s from. But, The Granola Bar’s coffee is of an entirely different caliber than most.

Their lattes are the perfect blend of steamed milk and espresso, allowing for a coffee that is sweet enough without any added sugar.

Jojo Adler ’16 also delights in many of The Granola Bar’s beverages. Adler describes the frozen hot chocolate as “heaven in a glass cup.”

Truth be told, Neat’s coffee disappoints me. The coffee is overall average—neither memorable nor noteworthy.

However, it’s possible that my dislike of the atmosphere—noisy, awkwardly far apart seating—contributed to my indifference of the coffee.

Starbucks’ introduction of the red cup marks the start of the holiday season. It’s a classic—it’s difficult to go wrong with a Starbucks drink.

The only fault I have with Starbucks is their chai latte. Although the latte I ordered may have been a fluke, the spices were overwhelming and even burned my throat. It was nothing like the spicy yet sweet chai latte I tried at The Granola Bar.

Regardless, Starbucks continues to be my favorite place for coffee. I usually order a latte or iced coffee, but quite honestly, all of their drinks are delicious.

Like me, Laine Crowder ‘15 ranks Starbucks above Dunkin Donuts. Her favorite Starbucks drink is the mint hot chocolate.

Dunkin Donuts is the outlier in this review—it differs from the other cafés I’ve mentioned in the sense that it’s viewed as more of a fast food chain. The interior is less “sophisticated” than Starbucks, so most consider Starbucks to be classier when, in reality, both sell high-calorie pastries, coffee, and hot chocolate.

Overall, I’m not a huge fan of Dunkin Donuts. When given the choice between Starbucks and Dunkin Donuts, I almost always choose Starbucks.

The lattes at Dunkin are just as excellent as that of Starbucks, but the similarities stop there. Unlike Starbucks, iced coffee at Dunkin is more diluted and far too watery, and the regular coffee isn’t as rich.

Ratner also considers Dunkin’s hot chocolate to be of a poorer quality than Starbucks’. “But, Dunkin hot chocolate is cheap, so it’s a trade off,” he qualified.

Kowalsky, on the other hand, appreciates and savors Dunkin’s drinks. “Dunkin Donuts for sure has the best hot chocolate,” Kowalsky said.

Not only is the atmosphere spectacular here but so is the coffee. However, Terrain isn’t so much of a grab-it-to-go sort of place—which, unless you’re in a time crunch, isn’t so bad considering the surrounding greenery and unique interior.

Although I do admit it’s fairly overpriced, I’m nevertheless a huge fan of both Terrain’s iced and hot coffee. I definitely prefer this café over the others when it comes to a sit-down coffee date with a friend. But, if on-the-go and only in need of a quick fix, I don’t think I would stop by Terrain over Starbucks.