Change up your Thanksgiving with these classic dishes 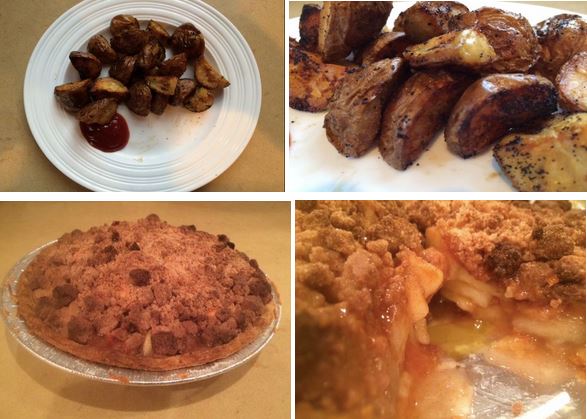 In just one short day, Thanksgiving and all of its festivities will be in full swing. Make sure to impress your family and friends on the big day with these great recipes that they will most certainly be thankful for.

A real crowd pleaser, this delicious pie will be the centerpiece of your dessert. Its crumbly top and warm, cinnamon filled center will have you and your guests licking the pan.

Mix the white sugar, one tablespoon of the cinnamon and the nutmeg together in a small bowl. Layer the apples and sugar mixture. Repeat the layering until you run out of apples.
Mix together the flour, brown sugar, cinnamon and butter. Mix with a fork until it becomes crumbly. Sprinkle mixture on top of apples.
Bake in a preheated 425 degree oven for 40-50 minutes. Cover the top for the remaining 15 minutes to avoid burning.

This side dish will make you wish you ate less turkey. These perfectly crisp and lightly salted cubes of goodness are the perfect side dish for any Thanksgiving feast.

Heat oil over medium-high heat in a pan.
Add potato cubes.
Season with salt and pepper to taste.
Stir frequently for five minutes.
Turn heat to high.
Add water and stir.
Cover pan with a lid.
Steam until all water evaporates, stirring occasionally.
Add butter and coat potatoes.
Bake in oven at 325 for 20 minutes to crisp potatoes.
Serve!

Nothing soothes an overly stuffed, post-Thanksgiving meal stomach like a mug of warm apple cider. This cider is perfectly tart and sweet, and the hint of cinnamon puts it over the top.

Place apples in a large pot.
Cover the apples with two inches of water.
Stir in sugar, cinnamon and allspice.
Boil for one hour, uncovered.
Cover pot, reduce heat and simmer for two additional hours.
Strain mixture through mesh cloth.
Discard the solids and drain with a cheesecloth.
Microwave to desired heat.