Top four coziest drinks for this fall from Starbucks 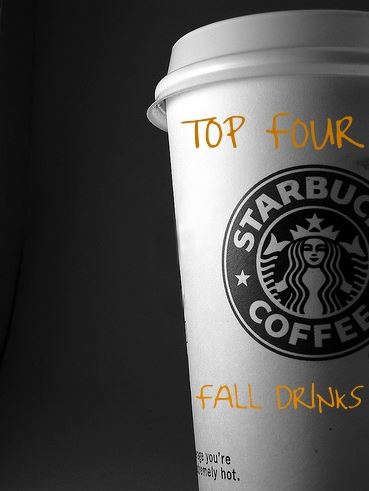 The changing of leaves and the transition from denim shorts to cable knit sweaters and ankle boots, are the official indicators that summer has said its final goodbyes and fall is ready to peak its head out while easing into the winter weather. To savor the fall tradition, Starbucks lures in their customers for their favorite season of beverages.

A roasty espresso with a strong scent of cinnamon and pumpkin spices topped with whipped cream, is the definition of fall in a cup. It’s Starbucks’ most well known and popular drink, it’s not any latte, it’s the crack of the beverage world. Yes, ‘tis the season for addicting Pumpkin Spice Lattes. Whether you’re taking advantage of the crisp fall weather, or bundled up on the couch watching Halloween classics, it is a necessity to have a hand curled around a cup of this latte to add a little spice to fall’s festivities.

With new competition on the block against the pumpkin spice latte, Starbucks has recently introduced a new holiday drink for the first time in five years, the Chestnut Praline Latte. Also known as Winter’s newest Pumpkin Spice Latte. The trending “holiday handcrafted” drink is made out of caramelized chestnut flavor, spiced praline bits and pieces and of course their signature whipped cream. After the nationwide release on Nov. 12, the new latte will compete the regular holiday beverages: Gingerbread Latte and Peppermint Mocha.

First there’s an initial hit of salt, then a chocolate caramel flavor before the rich, creamy toffee and mocha syrup. Drizzled with the predictable caramel and whipped cream, but also with the unexpected: salt crystals. “I like the salted caramel mocha, I’m not so much of a pumpkin person either,”  Malin Hovstadius ’15 said, “and I’m not a big tea drinker because I usually feel like there’s not enough caffeine for me.” Just like the warm and cold fall weather, the salted caramel drink offers both a salty and sweet taste.

Ah, of course, the most classic and underrated yet authentic and healthiest fall drink at Starbucks, the Chai Tea Latte. A sweet and spicy drink with originating ancient roots from India, where it was common to prepare black tea with traditional healing spices like cinnamon and black pepper. The warm, aromatic drink is comfort in a cup.