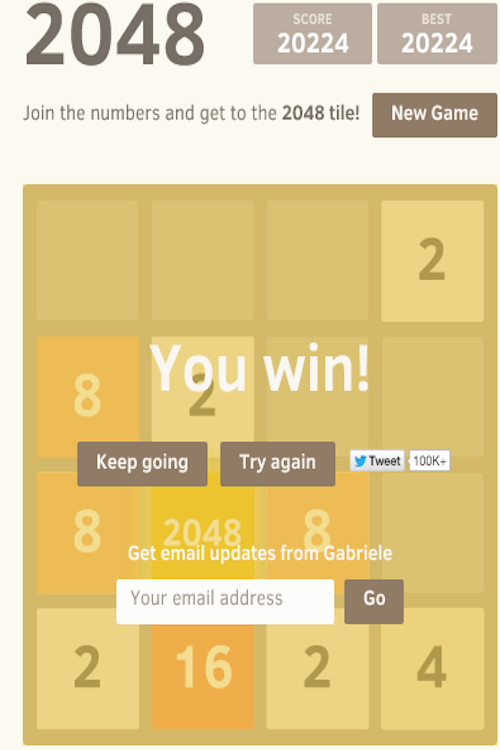 A new App has flooded Staples High School’s hallways. Like the plague, or a tsunami, or something equally devastating, it has wrecked havoc. Students are glassy-eyed, staring at their phones and swiping their fingers faster than Usain Bolt. It’s an epidemic worth fearing.

The game is played by swiping tiles of matching numbers together. You swipe two tiles with the number two together. Then that tile becomes four. Then you swipe two fours to make an eight. And so on. And so on.

And you never stop.

Julia Green ’15 is a recent convert. Green says she “hasn’t played it long enough to hate it” but expects to grow addicted fast. Green is proud of her scores “even though they probably suck.”

Audrey Seo ’16, has won the game. On her Facebook page, she updated her status with tips for victory. “Never go up, and keep your largest tile in one of the lower corners” she writes.

Addicting is the description of choice for most. Jackie Chappo ’15 has only played for two days, but already loves it. She likes that it’s a problem-solving game and not brainless entertainment.

“It stimulates your brain like a puzzle— apparently there are tricks to win but I want to figure it out on my own. That’s the point!” Chappo says.

In contrast, Dan Shapiro ‘14 thinks it’s based more on luck. He says if the right numbers don’t pop up in the right place, you can’t win.

An anonymous sophomore says he’s played in class by hiding his phone beneath his desk. He also notes that other students play “2048” in the classroom, but he expects it’ll blow over. A new game will swipe into our hearts.

But for now: “I can’t stop playing,” says the sophomore.