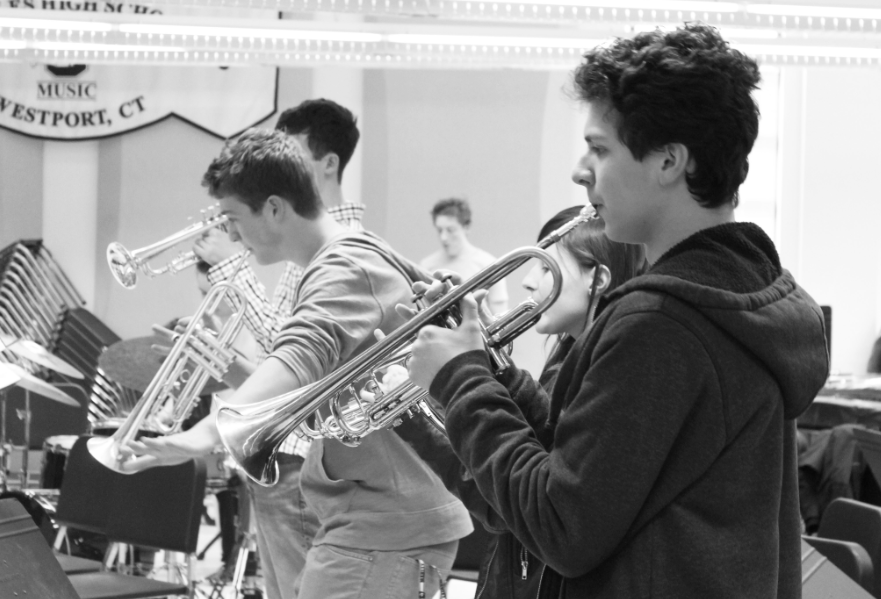 They have won countless awards and accolades, and they pack a full house at every concert.  Yet they are rarely on Good Morning Staples, or have posters hung up around school enticing you to go to one of their performances.

The Jazz Band is the best kept secret at Staples, not counting the secret bathroom and the fact that room 2044 is never above 20 degrees fahrenheit, of course.

But unlike room 2044, the Jazz Band is a pretty hot commodity in the Staples music world.  “You have to audition for the band at the beginning of the year, and it is a pretty selective group,” Jackson Ullman ’14 said.  Once the first round of auditions are over, the selected group unfortunately does not get handed a golden ticket by Randy Jackson and go to Hollywood.  Instead, the selected band members are informed by Mr. Mariconda, the band director, and practices begin every Thursday for three hours.

“We spend that time working on around six to eight Big Band pieces that we use for competitions and performances,” Jackson Ullman ’14 said.  Ullman ’14 is a senior member of the band, and a huge contributor.  In fact, instead of going down the route of some musicians and going to Hollywood, Ullman ’14 will take his trumpet and piano skills to Nashville, Tennessee, where he will be doing a joint program with the Music School at Vanderbilt University.

“Nashville is one of the biggest music capitals in the world.  Many artists are coming through the city, and I think that it will give me many opportunities to perform, and I’ll also get exposure to the music world,” Ullman ’14 said.

Other Jazz Band musicians like Ian Hubbell ’14 and Chris Copeland ’14 plan on continuing their music career in college, which was developed in the Staples Jazz Band.

The talented Jazz Band’s practices will soon come to an end, and the group is looking to see some Staples students in the crowd at their next concert.

“I know there is a number of people that have never heard us play, and I would like them to get a chance to,” Ullman ’14.