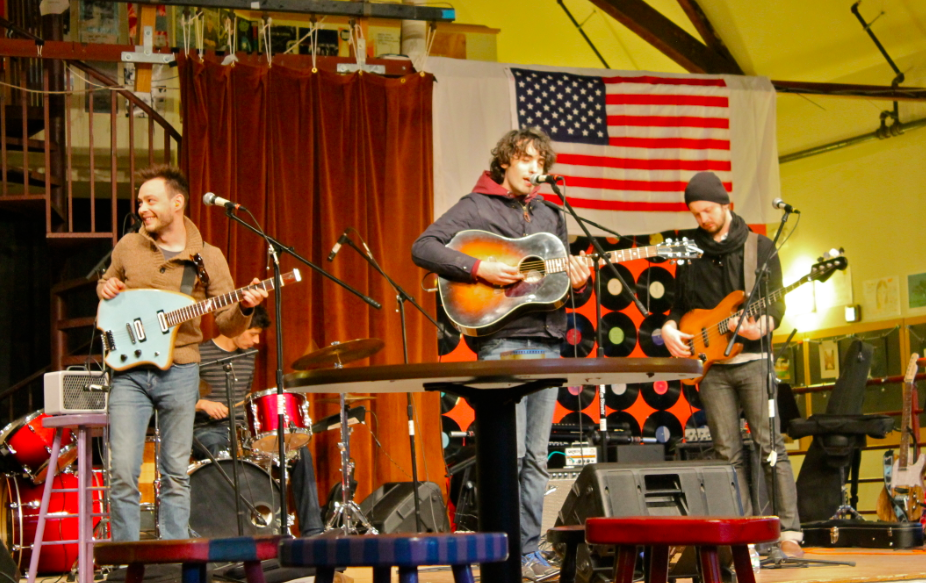 Teenagers talk and laugh, crowding around the overstuffed couches and game tables as the evening sun slowly sets. Local talents Fighting Static, James Kerr, Alex Retter and Sarah Barrios prepare to hit the stage. It’s seven pm on Friday, March 21, and the concert at Toquet Hall is about to begin.

Weston’s Peter Kerr was excited to return to Toquet Hall and soak up its lively atmosphere.

“The kids are really engaged,” said Kerr. “They’re playing billiards, waiting for the music, everyone’s excited. You can feel the energy.”

Weston High School senior James Kerr, who has been performing and writing his own songs since his freshman year, played guitar and sang three songs before passing the microphone to classmate Alex Retter.

Retter exuded a John Mayer-like vibe, singing a mix of originals and covers, such as Sting’s “Message in a Bottle.”

Next up was Torrington native Sarah Barrios, who put a fresh spin on pop hits like Lorde’s “Royals” and OneRepublic’s “Counting Stars.”

Barrios says she has loved music since she was little, but only got serious about nine months ago when she auditioned for X Factor. Although she didn’t get to the judges’ bench, she made the top 200 out of thousands of hopefuls and has since won a New England music award.

While she was nervous prior to her set, Barrios said she enjoyed playing on such a big stage in such a great space.

Bassist Garvey ‘15, said that the band has played at Toquet Hall three times now, and they have plans to play more gigs as well as record an EP.

“Toquet Hall has been our favorite place to play,” said Garvey. “I love how open the space is, and how close you are to the audience. Maybe if it were spoken about more, kids would be willing to just show up on their own and listen without having been specifically invited by a band.”

The enthusiasm of the crowd and the talent of the performers made the night one to remember.