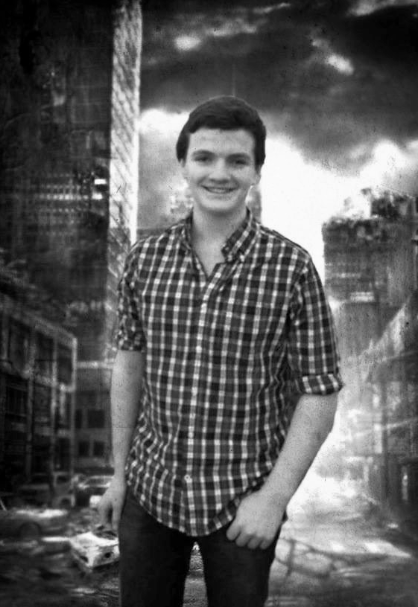 When talking to James O’Brien ’17, it’s easy to feel a bit green with envy. His sunny disposition and red-hot confidence can make you kinda blue, especially considering his recent accomplishment.

“Orange” was inspired by Manhattan, the story’s setting, and mentions the historic High Line and everyone’s favorite crooner, Frank Sinatra.

But in main character Lance’s world, the High Line is “one of the few surviving relics of the 20-21st century era” and Frank’s crooning is “long-gone.”

The U.S. is overrun with an apocalyptic disease.

While Lower Manhattan remains a haven for the healthy, Lance’s view across the Hudson River underlines just how fragile the safety is.

“Looking down what little street remained between him and the rising Hudson, he could see fires burning across the river in shells of old towers- silent to him, but constant. The stench of death hit him through the gusts of wind. He gagged.”

This chilling opening may seem a little bit far-fetched to some. It’s the power of the science fiction writer to create a world that still remains relatable and grounded in reality.

“I wanted to write something unique, as well as interesting and relatable,”  O’Brien said. “So I thought, what people are really scared of is something they can’t control or understand. I thought a disease would bring some of that in.”

“Orange” began as an assignment for O’Brien’s English class. When his teacher mentioned the contest, he couldn’t help but feel compelled to research the details and enter.

“I had no idea I would become a finalist, so I never imagined I would get to go.  Making third was a big surprise,” O’Brien said, especially when he learned his story was only about a third of the length of most of the others.

O’Brien won $100 and a free weekend membership at the convention. Excited to have the hard work of writing and the anxiety of waiting to hear back over, he could now kick back and enjoy his prize.

“Inside everybody was wearing a costume, everybody had a cool hat or shirt on, everybody was having these wonderful conversations,” O’Brien recalled fondly. “It was the most welcoming place. You could really feel the difference.”

“It was such a unique experience,” O’Brien said. “You can’t miss the people. They love what they do.”

But the real prize wasn’t the cash, the free stay, or the cool people; it was knowing that O’Brien had made it all possible for himself.

“The best part was knowing in the back of my mind I never would have gotten to experience it without something that I was able to create,” he said. “The whole thing was a blast.

‘Though it’s clear O’Brien takes well-deserved pride in his work, he also makes it clear it helps to know the tools of the trade.

“I read somewhere that a story can have one or two of three things: extraordinary people, extraordinary events, or an extraordinary setting,” O’Brien said. “To have all three just makes a bad story, to have none is boring, and to have one is alright. But to have two, and use them well, can make a story great.”