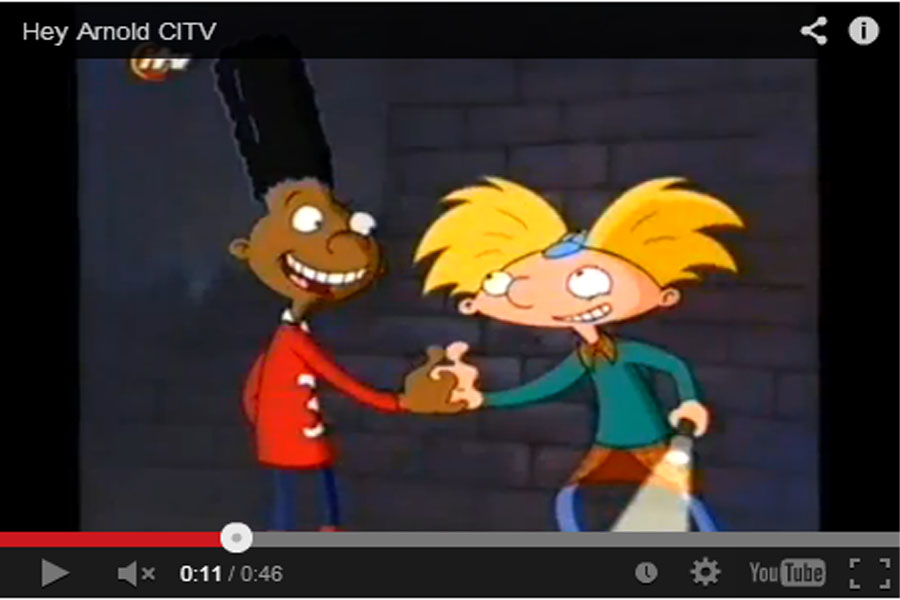 As young children, many of us probably spent endless hours excitedly watching the bright sights and sounds of Nickelodeon, Cartoon Network, and Disney Channel. The stories and characters we loved became a very real part of our lives, and even as we grew older, late-night reruns continued to fuel those fond memories.

So if you haven’t flipped to Nick at Night lately, think back now. How many childhood shows do you still remember?

Who could forget everyone’s favorite football-headed, kilt-wearing, 9-year-old roaming fictional city streets under zero parental supervision? Hey Arnold may seem to have all but vanished to the deepest caverns of late night Nickelodeon, but Arnold’s quirky adventures and oddball features remain in the hearts of all who adored the show as children. “The art style, the slightly twisted feel of it all just really tickles my fancy,” said Nick Ribolla, ’16.

Another display of kids with brightly colored hair and misshapen heads, Rocket Power seems apt to slip through the cracks when we recall our childhood TV. Even so, the wily antics of Otto and Reggie Rocket and friends surfing and skateboarding their way through the California beach scene was a lasting adventure for many. “When I watched rocket power as a little kid I just thought it was cool, but years later, I understood the humor I never even knew was humor,” Anabelle Porio, ’15 said.

“My favorite has to be Ed, Edd n’ Eddy,” said Porio. “All their personalities clashing is hysterical.” There’s definitely something that never gets old about three whacky kids coming up with ridiculous scams to run on their equally wacky neighbors, all in pursuit of coveted jawbreaker candies. “Ed Edd n’ Eddy still can make me laugh like a hyena,” said Ribolla. “And I still associate my childhood memories with the TV shows [like it] that were on as I grew up.”

Our childhood television choices definitely had some weirdos, but Dexter of Dexter’s Laboratory may take the cake as the absolute strangest. A pint-sized mad scientist with a secret laboratory built into his bedroom, Dexter’s hilarious character is made even kookier by his impossible inventions and constant rivalry with the troublesome sister DeeDee. “DeeDee was my favorite,” said Alison McGovern, ’16. “And I just loved Dexter’s voice.”

For some it might be hard to see that our beloved shows have faded from daytime television schedules, and as a result probably from our own schedules as well. But as long as we remember Arnold bickering with Helga and Dexter blowing up bubbling concoctions, we can smile at the memories that come flooding back, and keep those legacies alive.